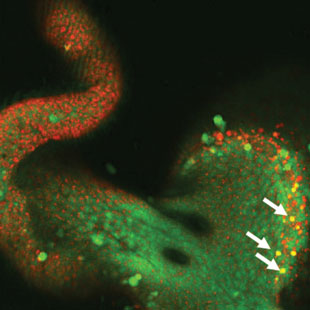 The paper
C. Brennan et al., “A model symbiosis reveals a role for sheathed-flagellum rotation in the release of immunogenic lipopolysaccharide,” eLife, doi:10.7554/eLife01579, 2014.

The background
The bioluminescent bacterium Vibrio fischeri, whose flagellum is encased in a membrane-derived sheath, colonizes newborn Hawaiian bobtail squid (Euprymna scolopes), contributing a light source that the squid use for camouflage. Researchers have assumed that the sheath prevented the host’s immune system from reacting to proteins in the flagellum. But the sheath itself sheds an immunostimulatory protein called lipopolysaccharide (LPS), a feature that has puzzled scientists.

The finding
To better understand the role of the sheath, Edward Ruby of the University of Wisconsin–Madison and colleagues colonized... 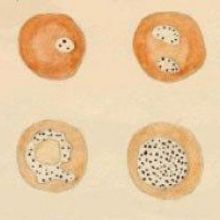