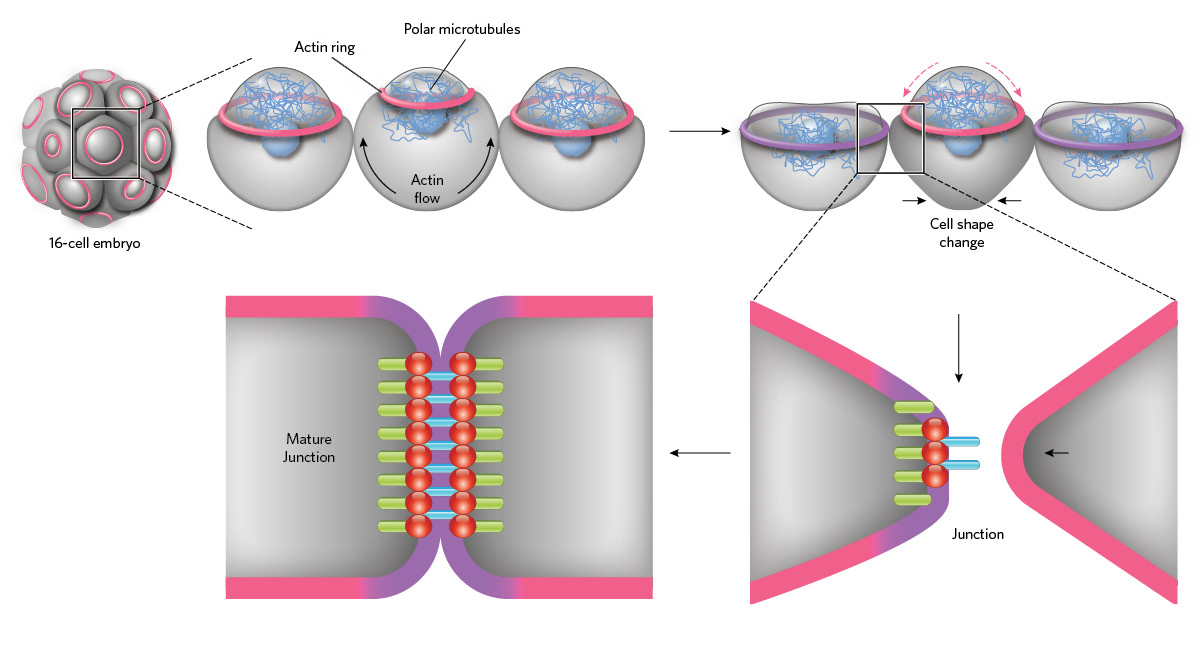 ZIP ZIP: After cells in the developing embryo divide, microtubules at the dividing poles of each cell pull actin proteins into a ring. Those rings expand across the cells and, with the help of the motor protein myosin, reshape each cell into a pyramid shape. The changing geometry of the cells allows the blastocyst cavity to form. The cavity becomes sealed as each cell’s ring touches another ring, and myosin pushes the edges, or junctions, of the rings together, with the help of cell adhesion molecules, zippering the junctions shut. If this process does not happen, embryos may fail to develop normally.
See full infographic: WEB | PDF
© STEVE GRAEPEL

Not long after egg meets sperm, the resulting mulberry-like mass of cells morphs into...

Biro and his colleagues used advanced imaging techniques to study live, fully intact mouse embryos as they developed in a Petri dish and found that rings of the protein actin form across the ball of cells and help to zipper the embryo closed in a multistep process. First, microtubules at the outward-facing poles of the cells pull actin proteins into rings that expand across each cell. Then, when one ring touches another ring, motor proteins called myosins accumulate along the regions where the rings touch. There they continue to build up, pushing the edges of the rings together, zippering them shut and sealing the outside of the ball of cells from its external environment, Biro and colleagues report in Cell.

“Following the observation of the expanding actin rings, we realized just how beautiful and intricate the coordination between all the outer cells of the embryo is,” Biro tells The Scientist. “Such consistency and coordination does not happen simply by chance.”

It’s now clear that filamentous actin and the plasma membrane are “the rails of the zipper,” notes study coauthor Nicolas Plachta of the Agency for Science, Technology and Research in Singapore, while myosin motors “drive the advancement of the zipper and allow for the recruitment of [additional myosin and other components] that then tightly seal the junction.”

The phenomenon is the opposite of another mechanism by which cells generate mechanical force: the formation of purse string–like actin rings, according to Gabriel Galea, who studies cellular mechanobiology at University College London and was not involved in the study. Those rings typically form through “collaboration” between neighboring cells, with each cell forming a small proportion of the overall structure, which can ultimately help the cells contract and then divide. In the new study, the actin rings instead form in individual cells and expand to coalesce as they join the cell’s neighboring rings. “Not only does this reveal the ‘birth’ of cytoskeleton-bound cell-cell junctions in the early embryo, but also identifies cellular processes likely to be unique to these early stages of development which could cause infertility or early embryo loss if defective,” Galea writes in an email to The Scientist.

Biro, Plachta, and their colleagues now plan to develop noninvasive imaging techniques to study the sealing of human embryos.