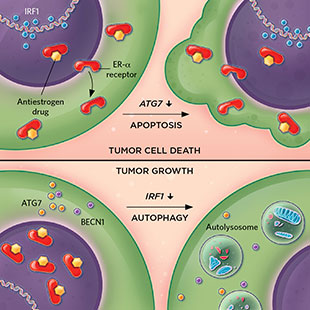 LIVE OR DIE: In breast cancer cells expressing estrogen receptor-α (ER-α), the inhibition of the autophagy gene ATG7 (top panel) allows an apoptosis transcription factor, IRF1, to lead the cancer cell to die upon antiestrogen therapy, which outcompetes estrogen for binding the receptor. When IRF1 is knocked down (lower panel), antiestrogens are less potent as the activity of ATG7 and another autophagy factor, BECN1, aids in cell survival by supporting autophagy.© EVAN OTO/SCIENCE SOURCE

About 70 percent of breast cancers express estrogen receptor-α (ER-α). In these cancers, the receptor binds estrogen then translocates to the nucleus, where it upregulates genes leading to cancer growth. Antiestrogen drugs, which compete with endogenous estrogen, can prevent this...

Previous studies showed that IRF1 was downregulated in antiestrogen-resistant breast cancer cell lines, suggesting that it was the loss of IRF1’s ability to induce apoptosis that led to resistance. Additionally, it was known that autophagy, a process in which a cell recycles its own cytoplasmic materials, increased during antiestrogen therapies and helped cancers survive. But what promoted autophagy and tamped down apoptosis was unknown.

Georgetown University’s Robert Clarke and colleagues now report that the genes influencing apoptosis and autophagy seem to keep each other in check. Mammary tumors from mice with only one copy of the autophagy gene ATG7 had higher nuclear levels of IRF1 than tumors from control mice. This inverse relationship held up in ER-α–positive human breast cancer tissue, where levels of ATG7 were inversely correlated with levels of nuclear IRF1.

To see if this association reflected causality, the researchers knocked down autophagy genes in human breast cancer cell lines using RNA interference and observed an uptick of both nuclear IRF1 and apoptosis. Conversely, knocking down IRF1 led to an increase in autophagy. They also found that as nuclear IRF1 levels increased, the estrogen receptor “gets popped out of the nucleus so that it can’t...regulate transcription in a pro-survival mechanism,” says Clarke. “So you get sort of a double hit” on the cancer cell. Apoptosis is induced, while cell growth is blocked.

“At the same time, the silencing of ATG7 and [another autophagy gene] BECN1 blocks the autophagy piece,” adds Clarke. “There are lots of things that happen all at once.”

“What they showed that was new is that...IRF1 is important for not only apoptosis but also it’s able to switch between autophagy and apoptosis,” says Victoria Seewaldt, who studies breast cancer at the Duke University School of Medicine.

In the presence of an antiestrogen, knocking down IRF1 made cells less sensitive to the drug, while knocking down ATG7 had the opposite effect. Stabilizing IRF1 expression might be a way to treat antiestrogen-resistant breast cancers, Clarke says.

However, knocking down both IRF1 and ATG7, an experiment that mathematical modeling had suggested they try, restored antiestrogen sensitivity, which led the authors to conclude that there must be another pathway, independent of IRF1, that can lead to apoptosis when cells are treated with antiestrogens. Solving this apparent paradox is the Clarke group’s next ambition.