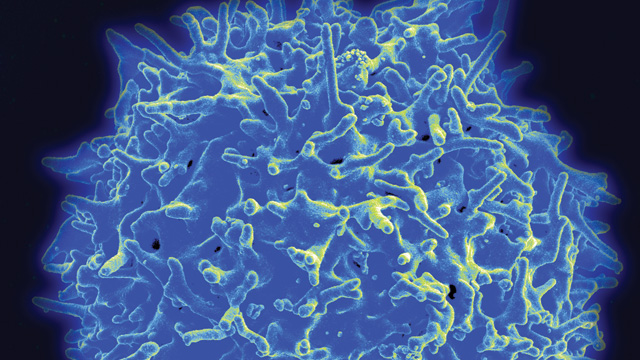 PLAYING OFFENSE: T cells, like the one pictured here, do not attack cancer cells when in the presence of certain signals. New research shows that what was thought to be a suppressive signal may actually help activate an anticancer immune attack. NIAID

The cytokine IL-10 was previously thought to contribute to a tumor’s ability to suppress the immune system because of its role in reducing inflammation. But John Mumm, Martin Oft, and colleagues at Merck Research Labs have discovered that IL-10 actually has predominantly the opposite effect: it activates CD8+ T cells to attack tumors.

Mumm first began to doubt IL-10’s immunosuppressive role when he found that the cytokine activated human CD8+ T cells in vitro. Then, the team discovered that mice lacking...

The researchers found that IL-10 induces the production of additional cytotoxic enzymes by CD8+ T cells inside tumors, making those immune cells better killers. It also causes the T cells to express and release interferon-?, a cytokine that causes tumor cells to present antigens that the T cells recognize and attack.

In mice, treatment with IL-10 controls tumor growth even in large, established tumors. “It opens the door for possible translation into human clinical studies,” says Jay Berzofsky, head of the Vaccine Branch of the National Cancer Institute. Martin and Oft have since founded a biotech to explore use of IL-10 in human cancer therapies.