PhuZed Phage: When phage infect bacteria, host proteins begin transcribing a viral gene to produce PhuZ proteins (1), which form tubulin-like polymers that elongate from each pole of the cell (2). The filaments position replicating viral DNA at the cell’s center (3). Newly made viral DNA is encased in capsids (4), and released by lysis from the cell after final assembly (5) to infect other bacteria.

Until a few years ago, the cytoskeleton was thought to be a structure unique to eukaryotes, but a stream of discoveries in the past decade has shown that prokaryotes also have actin- and tubulin-like components. Tubulins are proteins that form microtubules, which manage everything from sorting genetic material during...

The initial discovery relied on a simple database search for tubulin-resembling genes in the genome of a bacteriophage that infects Pseudomonas chlororaphis bacteria. The team named the family PhuZ for phage tubulin/FtsZ—FtsZ being a bacterial tubulin. In characterizing the structure of PhuZ, the researchers found that it forms filaments like other tubulins, but in a unique way. Individual monomers of tubulin proteins typically connect with one another longitudinally to form filaments, but Agard and his colleagues found that the distance between PhuZ monomers in this chain is much greater than that among any other tubulins known. “To me, that hints at unexpected properties, and unexpected properties are always good!” says Agard. Instead of having more robust longitudinal contacts, monomers of PhuZ have an extension at one end—the carboxy terminus—that acts like a bridge to span and strengthen the links of the PhuZ filament.

To examine the novel protein’s function, the group tagged PhuZ with green fluorescent protein. They observed that PhuZ formed filaments that extended across the host cell, from pole to pole, and that also touched the phage DNA clustered in the middle of the cell.

The researchers also studied a mutant form of PhuZ, which lacked the protein’s ability to assemble and disassemble dynamically, and instead assembled permanently into a polymer. They found that in most cases, the DNA cluster no longer localized to the middle of the cell. And a third of cells infected with mutant-PhuZ phages had more than one viral DNA cluster. The mutant protein also reduced the replication capacity of the phage by about half. The results led Agard’s group to suspect that because DNA positioning affected replication numbers, the PhuZ protein could be critical to the phage’s overall ability to infect its bacterial host.

Jan Löwe at the MRC Laboratory of Molecular Biology says that the findings add to the growing expanse of research on non-eukaryotic cytoskeletons. “I think this is a great example of what’s still to come,” he says. 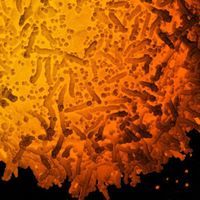