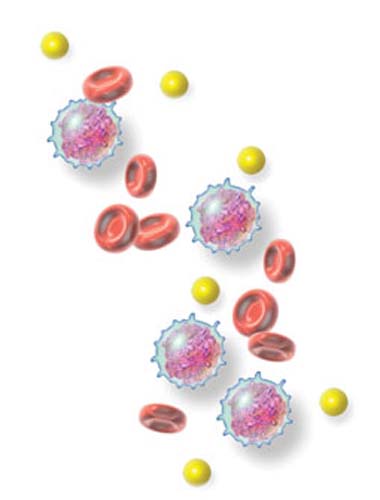 The formation of atherosclerotic plaques within arteries underlies most forms of cardiovascular disease (CVD). Atherosclerosis is a chronic inflammatory disease in which inflammatory cells (e.g. leukocytes) and lipids accumulate to form a plaque within the artery wall, underneath the endothelial cells which line the vessel. Despite a wide range of systemically acting risk factors, such as high cholesterol, plaques are not distributed evenly throughout blood vessels. Plaques tend to form in regions of the arterial tree where there are bends or where the vessels fork into branches. In 1969, Colin Caro and colleagues made the observation that these areas of plaque formation were associated with low or altered blood flow.1 This led to the idea that mechanical forces might play a role in lesion development. In recent years researchers have started to investigate and understand the molecular mechanisms underlying plaque formation, bringing Caro’s findings into sharp...

The endothelium is in direct contact with blood and is therefore constantly exposed to the drag force exerted by flowing blood, known as shear stress. Regions of vessel curvature or branch points, experience low and/or disturbed blood flow, creating an area of low shear stress. Straight, unbranching vessels experience uniform, unidirectional flow, creating high shear stress—which protects vessels from plaque formation. In 2005, Martin Schwartz and colleagues identified a mechanosensory complex on endothelial cells which was able to detect mechanical forces exerted by the flowing blood and initiate signalling within the cell that resulted in changes in endothelial cell function.2

Endothelial cells in regions of disturbed blood flow have been found to exhibit low-grade chronic inflammation3 and have differential expression of a number of genes implicated in both the inflammatory response and in protection against it,4 suggesting that shear stress may influence the inflammatory state of the endothelium. In the last decade, researchers have begun to trace the pathways by which that influence might operate.

The infiltration of inflammatory leukocytes into the vessel wall occurs very early in cardiovascular disease, and is considered a key factor in the development of atherosclerosis. Leukocyte infiltration is triggered by proinflammatory signalling from the endothelium, which increases the expression of adhesion molecules such as VCAM-1 and E-selectin, thus causing leukocyte recruitment. Two key proinflammatory signalling pathways, the mitogen- activated protein kinase (MAPK) pathway and nuclear factor-?B (NF-?B) pathway, have been identified as being differentially regulated at protected and susceptible sites of the arterial tree.4,5,6

Endothelial cells at low-shear regions are primed for NF-?B signaling, whereas NF-?B activity in high-shear regions is minimal. This has been attributed to the expression of a key negative regulator of NF-?B signaling, Krüppel-like factor 2 (KLF2) in protected areas, which sequesters a critical coactivator of NF-?B, preventing transcription.5 Numerous studies have shown that KLF2 is activated in response to high shear stress,5 placing KLF2 as a key mediator of the anti-inflammatory effects of high shear stress. The atheroprotective effects of KLF2 may also be attributed to negative regulation of the proinflammatory MAPK network, since KLF2 inhibits the nuclear localization of MAPK transcription factors.6 To protect against inflammation, proinflammatory signalling also activates negative feedback mechanisms which limit the inflammatory response. One negative regulator of particular interest is MAPK phosphatase-1 (MKP-1), because its expression is regulated by shear stress. We have shown that exposing endothelial cells to high shear stress results in a marked induction of MKP-1, which protects arteries from inflammation. In support of this, we found that deletion of the MKP-1 gene led to increased proinflammatory signalling in regions of high shear stress.7

In subsequent studies we found that the transcription factor Nrf2, nuclear factor-erythroid 2-related factor 2, was preferentially activated in protected regions of the mouse aorta exposed to high shear stress, while only inactive forms were present at low-shear, atherosusceptible sites. We studied Nrf2 knockout mice and found that in these animals inflammation was significantly increased in the protected regions, suggesting that Nrf2 normally acts to block proinflammatory signaling in regions of high shear stress. The atheroprotective effects of Nrf2 are due to negative regulation of the MAPK signaling pathway, mediated in part by enhancing the activity of MKP-1.8

Identifying the central regulators of the anti-inflammatory pathway is of major interest; their manipulation could potentially reduce inflammation at atherosusceptible sites and slow or prevent the lesion formation that initiates CVD. Recent studies within our own group have highlighted sulforaphane, a negative regulator of the MAPK pathway, as a potential therapeutic intervention. Sulforaphane is a naturally occurring antioxidant that activates Nrf2 found and is in high quantities in broccoli and other green vegetables. We have shown that sulforaphane reduces inflammatory activation of endothelial cells at atherosusceptible sites by increasing Nrf2 activity.8 We believe that this is the first example of a therapeutic intervention that enhances expression of protective, anti-inflammatory genes at atherosusceptible sites and therefore may, in the future, have clinical utility for the prevention or treatment of CVD. Our findings also suggest that consumption of sulforaphane-rich vegetables may lower the risk of atherosclerosis.

Despite recent advances in this field, the influence of shear stress on vascular physiology remains poorly understood. Broader gene-expression profiling studies of endothelial cells at atherosusceptible and protected sites are now required to further define the molecular mechanisms that control the spatial distribution of inflammation and plaque formation, with the hope of uncovering other targets for pharmacological manipulation.