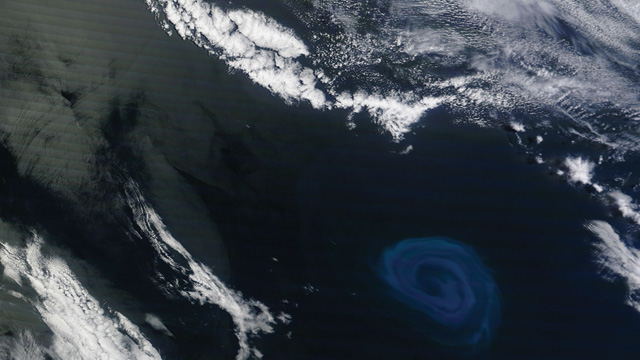 On a voyage home from the Mid-Atlantic Ridge, Olav Godø, of the Institute of Marine Research in Bergen, Norway, changed the settings of the research boat’s acoustic instruments. Upon analyzing the collected data back home, the team verified that their instruments had captured what looked like several mesoscale eddies—enormous whirlpools 80–150 kilometers wide. In this and a 2009 follow-up study of a 50-km eddy, they were able for the first time to document fish feeding all along the eddies’ depth.

Using a slower ping rate to probe deeper waters, in addition to satellite imagery to confirm the...

Earlier studies had shown that because they stir up ground-layer nutrients, eddies are able to feed a greater volume of planktonic life. Godø’s experiments showed that fish that normally stayed at a fixed depth swam to the eddy, which can last several months, and fed on plankton all along the height of its water column. It seemed as if the fish “adapted to eat this favorite prey,” says Godø.

Many regulations that aim to protect wildlife habitats focus on “the sea bottom,” says Ferdinando Boero from the Università del Salento in an e-mail. This research could help turn attention to the entire water column, he says.