racking neuronal fibers in the central nervous system is critical for understanding the organization and pathophysiology of the brain. Neuronal connections between functional areas of the brain have been historically conducted using invasive techniques in experimental animals which were often terminal procedures. The recent advent of modern technologies has advanced neuroanatomical applications and ushered in a new era of tracing neuronal fiber tracts in living brains.1 This article examines several neuroanatomical tracing techniques and their associated nuances with each system. 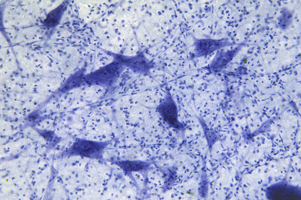 The earliest examination of brain anatomy involved staining protocols to label neurons, myelin, and nuclei. This includes initial renditions of silver stains developed by Camilo Golgi which was further refined by Ramon y Cajal to visualize neurons using light microscopy. Other standard staining methods such as Hematoxylin and Eosin could differentiate axons and dendrites from astrocytes, oligodendrocytes and glial cells based on a...

Keeping Track: The rise of Neuro-tracers

Tracing neurons is achieved through monitoring axonal flow between synapses and neuronal cell bodies. Lipophilic fluorescent neuro-tracers such as DiI (1,1'-Dioctadecyl-3,3,3',3'-Tetramethylindocarbocyanine Perchlorate) allow for anterograde and retrograde axoplasmic flow monitoring.2 Other retrograde neuro-tracers used to study innervation, and neural cross talk includes Fast Blue and Wheat Germ Agglutinin Horseradish Peroxidase (WGA-HRP). Once injected, the tracer is picked up by neuronal nerve endings, only if they have axonal terminals. It is very challenging to maintain a steady rate of tracer-infusion ensure uniform diffusion. The use of precision syringe pumps can significantly improve this challenging technique and ensure the accuracy of neuro-tracing experiments. A class of neurotropic viruses tagged with fluorescent protein is also classified under this category. Unlike classic neuro-tracers which cannot cross synapses, the viral tracers can label both pre-synaptic and post-synaptic neurons.

Sparking up a connection: Neuronal Electrophysiology

Measuring voltage changes across neurons and innervated tissues is another form of tracking neural fibers. The action potential activity of neurons can be monitored using large-scale electrical signals such as electroencephalography (EEG) or using localized intracellular and extracellular electrophysiological monitoring. The use of voltage-sensitive dyes in combination with voltage-dependent patch clamp analysis is commonly employed using stereotactic frames. Tracing fibers is also important to study the long-term growth of transplanted neurons. This has implications for several neurodegenerative disorders including Parkinson’s disease, Alzheimer’s disease, and Amyotrophic Lateral Sclerosis. Rodent models are most commonly used for neuronal tracing experiments. The use of genetically modified mice designed for functional loss of key proteins or overexpressing other components is particularly useful in this mode of experiments.3

Developing New Pathways: The Rise of Next Generation Techniques

Using the aforementioned experimental techniques is not conducive to applications in living human brains. Diffusion Tensor (DT) is a 3D MRI-based imaging technique which makes it possible to trace neural fibers and white matter connectivity mapping at a cellular level.4 DT-MRI has been validated to classify and quantify neuronal fiber pathways. Since MRI is a non-invasive imaging platform which doesn't require contrast dyes or tracers, this technique is particularly desirable In DT-MRI, the quantitative assessment and orientation of neurons are dependent on different cell’s sensitivity to water movement.5-8 Water molecules diffuse at varying rates amongst different tissues depending on its type, architecture, and inter-cellular connections.

Coupling neural fibers in different brain regions to their function is critical to understanding the organization of the central nervous system. The use of traditional tracing techniques in combination with modern non-invasive imaging applications offers a wide variety of modes that are quite effective at monitoring neural activity.