The parallel development of instrument hardware and dyes expands the number of overall parameters that can be analyzed in single experimental run, with each additional parameter translating into an exponential increase in data acquisition capacity and research potential. Thanks to over 45 years of development, flow cytometry is now an integral protein analysis tool that enables scientists to delve progressively deeper into cellular characterization and profiling.

As the new millennium began, flow cytometry had reached a plateau, as scientists could not detect more than 18 parameters simultaneously. Around this time, Sirigen designed and optimized a novel class of dyes derived from the chemistry behind Alan Heeger, Alan MacDiarmid, and Hideki Shirakawa’s Nobel Prize-winning discovery of conductive polymers. These new polymer-based dyes were groundbreaking and led initially to a series of direct and energy transfer tandem dyes excited by the violet laser.

Researchers from BD Biosciences recognized the untapped potential of the UV laser and decided to leverage Sirigen polymer dye technology to create a new family of dyes excited by UV wavelength lasers. Over three years, BD Biosciences developed seven BD Horizon BrilliantTM Ultraviolet (BUV) dyes. These dyes were designed and optimized to work with the 355 nm UV laser rather than the 375 nm laser to minimize potential cross excitation of the violet dyes. BUV dyes have progressively changed flow cytometry while addressing several unmet needs for the scientific community. 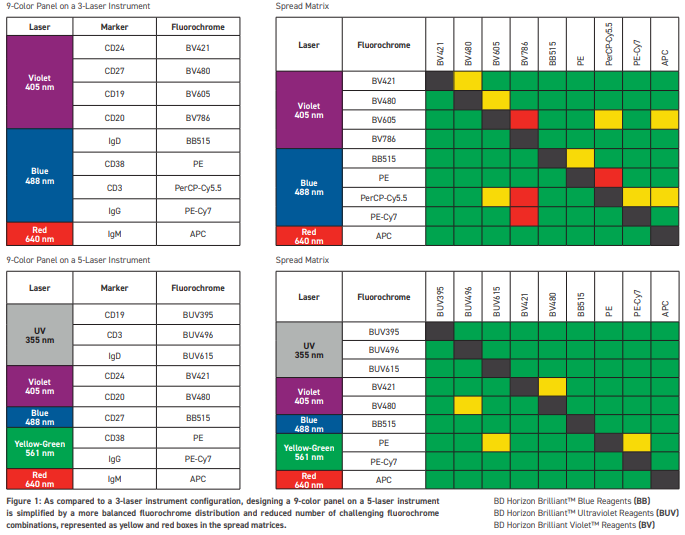 Before the development of BUV dyes, many 5-laser instruments came equipped with a 375 nm ultraviolet (UV) laser in addition to the four common violet, blue, yellow-green (YG), and red lasers. However, scientists used the UV laser almost exclusively to detect DNA-binding dyes such as DAPI and Hoechst in cell viability and cell cycle studies, or to detect hematopoietic side populations. This configuration enabled detection of 16 phenotypic markers plus 2 functional dyes, but moving beyond that was difficult.

Scientists who need to design complex multicolor panels are often forcibly guided by reagent availability limitations rather than proper panel design practices. The first two BUV dyes (BUV395 and BUV737) conjugated to monoclonal antibodies increased the choice of available reagents while still enabling the simultaneous detection of 18 phenotypic markers. However, designing 18-color panels remained challenging, especially because of visible spectrum crowding (6 violet detectors and 5 YG detectors) and the use of high spillover fluorochromes such as PE-Cy5 and PE-Cy5.5.

The development of two additional BUV dyes (BUV563 and BUV661) did not increase the number of detectable parameters, but rather offered an alternative to PE-Cy5 and PE-Cy5.5, easing visible spectrum crowding, providing less spillover, and enabling a more balanced distribution of fluorochromes across the five lasers.

The addition of three more dyes (BUV496, BUV615, and BUV805) to the BUV dye family, together with the development of higher capability flow cytometers able to detect up to 50 parameters, eventually allowed scientists to break the 18-parameter barrier. This opened the way to high-parameter flow cytometry, enabling, for the first time, the detection of up to 28 colors via conventional flow cytometry when BUV dyes were used in combination with other new dyes. The exponential and sudden increase in resolution power enabled cell characterization at an unprecedented depth. Moreover, these three dyes also facilitated a more balanced fluorochrome distribution across the five lasers (Figure 1). The resulting reduction in spillover not only made complex panels possible, it also simplified the process of designing less complex panels.

To further complement the BUV dyes and provide customers with panel design flexibility and expanded flow cytometry capabilities, the scientists at BD created BD OptiBuildTM, leveraging a groundbreaking technology to produce on-demand conjugations. This resulted in the rapid expansion of BUV dye-conjugated reagents and products to support the community’s ever-evolving research needs.

The rapid expansion of both the BUV fluorochromes and the BUV reagent portfolio established the UV laser as indispensable for highparameter flow cytometry panels run using instruments such as BD FACSymphonyTM A3 and A5 Cell Analyzers and the BD FACSymphonyTM S6 Cell Sorter. Today, any high-parameter conventional flow cytometer on the market is equipped with an UV laser and relies on BUV dyes.

The ultraviolet laser and BUV dyes also play a critical role in the development and adoption of spectral flow cytometry, enabling today the simultaneous detection of over 40 parameters. As we look towards the future of flow cytometry, it is clear that BD Biosciences is uniquely positioned to lead the dye revolution with its line of BD Horizon BrilliantTM Ultraviolet and BD OptiBuildTM Reagents (Figure 2). 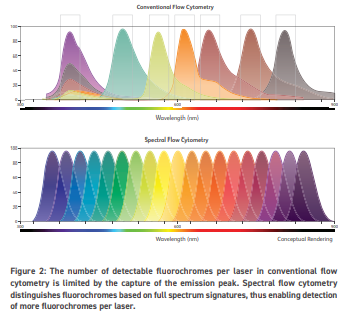