It is an approach that offers a number of advantages over traditional batch methods for particle generation, and can produce very small to large yields of monodisperse particles. The ability to manufacture ‘on demand’, combined with reproducibility and reliability, increases efficiency and reduces waste. This article looks at an emerging medical application of this technology, the production of encapsulated therapeutics for drug delivery.

Biocompatible and biodegradable polymers, such as poly(lactic-co-glycolic acid) (PLGA), are frequently used in the pharma industry to encapsulate active pharmaceutical ingredients (APIs) and then degrade in the body over time, releasing the drug in a controlled way. The applications are numerous, from targeted release of steroid treatments or radioactive materials used in cancer therapies, to nutraceuticals, such as vitamin C. However, the speed of drug delivery and release is affected by the size and shape of the PLGA particle, and strict control of these parameters is necessary to ensure that the patient receives the correct dose of the therapeutic at the right time. This can be a problem when traditional batch production is used to produce the particles, as it can be difficult to encapsulate the API, and these methods tend to generate irregular shaped or sized droplets – sometimes both – that end up being discarded.

To avoid the issues associated with batch techniques, many companies are now turning to microfluidics for drug encapsulation, taking advantage of its capability to reproducibly generate monodisperse particles, which significantly reduces the amount of API wasted from rejected droplets. To encapsulate an API, a solution of PLGA in an organic solvent is mixed with the drug, and then the polymer is solidified into a particle. The challenge is to get the API, which is frequently water soluble, into the organic solvent; while some drugs will dissolve in organic solvents, many don’t. One option is to produce the drug in powder form (Figure 1) and suspend it in the solution which, although hard to do using a batch process, can easily be achieved using a microfluidic approach. Another is to make a multiple emulsion (Figure 2), where the drug is encapsulated within a water droplet inside a polymer outer droplet, a process that again is difficult by batch methods but very controllable using microfluidics. 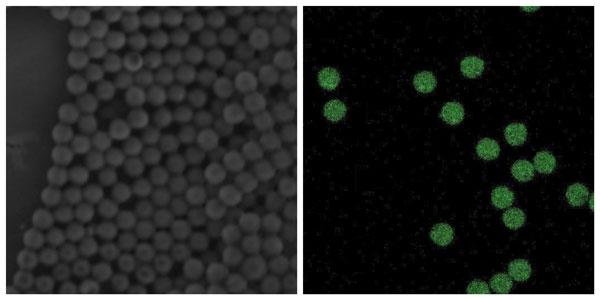 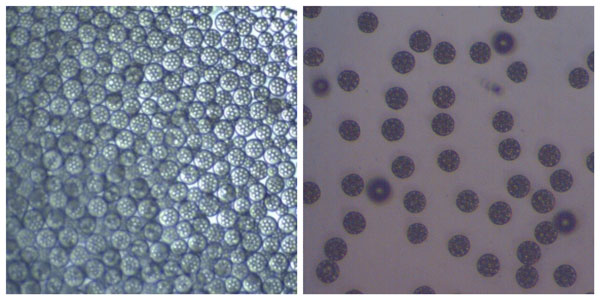 Using microparticles in this way has huge potential in drug development and delivery – for example, to improve solubility or to direct the therapeutic to a specific site by modifying the particle with active groups or antibodies – allowing the API to be efficiently transported around the body and released on reaching the target region. An area of particular interest is radiation therapy; by encapsulating radioisotopes in a functionalized particle, radiation can be targeted to the correct place to directly attack a tumor. Optimizing the size and shape of particles helps to ensure that the correct dosage is achieved and guarantees timely delivery – especially important with radiotherapy agents that have a relatively short half-life. A microfluidic approach is ideal for this type of application, as particles can be made on demand, adapted to the specific patient’s needs, and produced in small amounts. Batch production would be impractical in this instance to cost-effectively produce a small yield of particles – a few hundred milligrams – for a single patient; a lot of material would be wasted, generating significant amounts of radioactive waste to be safely disposed of.

Early success with microfluidics in this application has led Dolomite Microfluidics to set up a consortium including several pharma companies to focus on creating the next generation of robust and reliable microfluidic instruments. The aim of the group is to develop integrated systems capable of offering real-time quality control of particle production that would meet FDA and GMP requirements – an option that is not currently commercially available. Software is already being developed that monitors the particle size and feeds directly back to the control system, allowing any necessary adjustments to be made in real time. This ability to consistently create monodisperse particles of the exact size required – and at a high yield – is a huge step forward, and prototypes will be sent to consortium members to establish the proof of concept.

There are many changes, and an exciting future, in store for microfluidics. Instrument manufacturers need to continue to support this expansion through the development of modular and easy-to-use systems, helping to push microfluidics into areas that customers had not considered before – the potential is astonishing.