Immunoblotting is frequently used for immunodetection of phosphoproteins, in some cases following immunoprecipitation of the cellular extract. The signals from each probe can then be compared and phospho-specific fractions visually assessed or quantified by densitometry. However, the time and effort required in these protocols has driven many researchers to seek out ELISA-based methods, which offer a faster, higher throughput alternative.

In this article, we present a study in which the phosphorylation of two proteins, STAT1 (Tyr701) and Mek1 (Ser217/221), is detected in response to various agonists. Data from the RayBio® Phosphorylation ELISA kits will be compared to traditional immunoblotting.

RayBio® Phosphorylation ELISA kits contain antibodies for both phosphorylated and total protein (loading control) detection in parallel. Each kit includes a positive control, which is a cell lysate specially prepared to produce a strong phospho-positive signal. The positive control is intended to be used as a reference sample rather than an actual calibration standard, and it’s inclusion in the assay protocol is optional.

In a single microplate, up to 24 different samples may be simultaneously tested in duplicate (including positive controls, if used), producing both phosphorylated and total protein signal outputs. The protocol involves pipetting fresh or thawed lysates into an antibody-coated 96-well microplate, followed by washes and subsequent incubation with anti-phosphorylated antibody or anti-pan antibody. After further washing, an HRP-conjugated secondary antibody is added. Colorimetric detection of captured protein is carried out using TMB substrate solution where blue color intensity develops in proportion to the amount of phosphorylated protein or pan protein bound.

Some researchers may be interested in screening for only phosphorylated protein signals rather than total and phosphorylated in parallel. For this application, each Phosphorylation ELISA kit is also available in “phospho-only” format, containing only a phospho-specific antibody pair. This format allows the researcher to screen more conditions (48 duplicates per plate) for a lower cost compared to the “phospho plus total” readout format.

The assay procedure has minimal hands-on time and hundreds of samples can be assayed by a single technician in one day. Thus, the RayBio® Phosphorylation ELISA represents a more rapid and efficient alternative to multi-step phospho-protein detection by immunoblot analysis, which requires a minimum of two days processing time. Below, we present two examples of analyses using the Phosphorylation ELISA kits.

STAT is a transcription factor implicated in programming gene expression for biological events as diverse as embryonic development, programmed cell death, organogenesis, innate immunity, adaptive immunity and cell growth regulation1. In the study presented here, cultured A431 cells (an epidermoid carcinoma cell line) were treated with recombinant human epidermal growth factor (EGF) to induce EGFR-mediated signaling cascades and JAK-STAT signaling. Cell lysates were analyzed by both RayBio Phospho-STAT1 (Tyr701) ELISA (Figure 1A) and traditional immunoblot (Figure 1B). After EGF treatment, a robust and rapid phosphorylation of STAT1 at Tyr701 was observed in parallel with total STAT1 levels by both detection methods (Figure 1). We note that immunoblots were incubated with anti-phospho-STAT1 (Tyr701) and anti-pan STAT1 (the same antibodies used in the RayBio Phosphorylation ELISA kit).

To compare the sensitivity of the ELISA kit to traditional Western blot analysis, EGF-treated A431 cell lysates were serially diluted and assayed by each approach. Both methods exhibited similar sensitivity, with lowest detectable limits well below 1 µg/ml of total lysate protein (Figure 2), concluding that the ELISA kit is equally sensitive as traditional immunoblot, but can be completed inside 6 hours.

Mek1 is a protein kinase that functions in the mitogen-activated protein kinase (MAPK) signaling cascade, and is involved in the regulation of normal cell proliferation, survival and differentiation. In this study, HeLa cells were treated with tetradecanoylphorbol-13-acetate (TPA), a potent activator of protein kinase-C (PKC) pathways. Cell lysates were analyzed using both RayBio® Phospho-Mek1 (Ser217/221) ELISA, and by immunoblot. After TPA treatment, a robust and rapid phosphorylation of Mek1 was detected in parallel with total Mek1 levels by both methods, concluding that the Phospho-Mek1 (Ser217/221) ELISA has similar sensitivities to the immunoblot method (Figure 3). Immunoblots were incubated with anti-phospho-Mek1 (the same antibodies used in the RayBio Phosphorylation ELISA kit).

RayBio® Phosphorylation ELISA kits are a rapid, sensitive, high-throughput, cost-effective and convenient method for monitoring the activation of important biological pathways in cells or tissues.Unlike immunoblots, which require several days processing to obtain parallel signals for phosphorylated and total target protein, the Raybiotech’s ELISA method achieves comparable sensitivity within 6 hours processing time. Up to 24 different experimental conditions can be simultaneously screened in duplicate on one plate with phosphorylated and total (pan) protein readouts assayed. In this format, several hundred samples can be assayed by a single technician in one day. 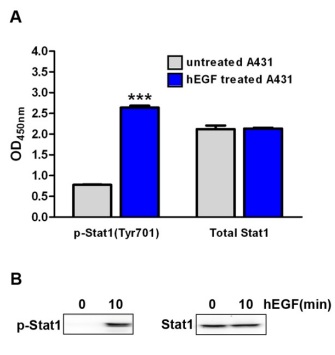 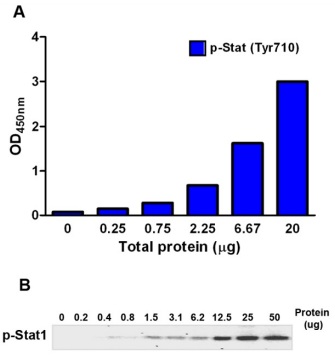 Figure 2: Comparative sensitivity of the detection of Phopho-STAT1 levels in A431 Cells following stimulation with Epidermal Growth Factor (EGF) by RayBio® Phospho-STAT1 (Tyr701) ELISA and by traditional immunoblot techniques. A431 cells were treated with 100 ng/mL recombinant human EGF for 20 minutes to induce phosphorylation of STAT1. Serial dilutions of lysates were analyzed by (A) RayBio® Human/Mouse Phospho-STAT1 (Y701) and Total STAT1 ELISA (cat # PEL-STAT1-Y701-002) and (B) by immunoblot. Immunoblots were incubated with anti-phospho-STAT1 (the same antibody used in the ELISA kit). 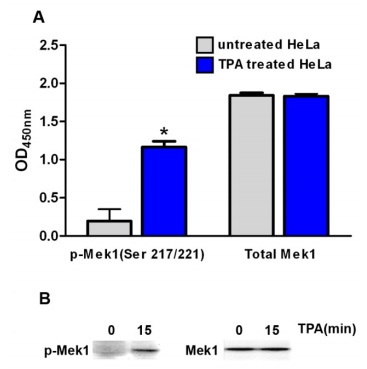 Figure 3: Detection of relative Phospho-Mek levels in HeLa Cells following stimulation with TPA. HeLa cells were treated with TPA for 15 minutes. Cell lysates were analyzed using (A) Human/Mouse/Rat Phospho-Mek (S217/S221) & Total Mek ELISA (cat # PEL-MEK-S217-002) and (B) by immunoblot. Immunoblots were incubated with anti-Mek1 or anti-phospho-Mek1 (the same antibodies used in the ELISA kit). *=P<0.05, n=3.

RayBio® Phosphorylation ELISA is a rapid, convenient and sensitive sandwich ELISA for the in vitro measurement of key signaling pathway phosphoproteins in cell or tissue extracts. Over 20 different kits are available for well-studied pathway molecules such as EGFR, Akt, Erk1/2, p38 alpha, Mek1, STAT1, STAT3, and Met. RayBio Phosphorylation ELISA also features site-specific phospho-antibodies which can detect a single phosphorylated residue (for example, Tyr1086 of EGFR). This method is an improvement on traditional labor-intensive immunoblotting protocols that require 2-3 days of processing time.