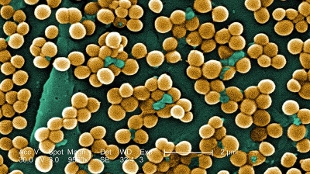 MRSA is just one of many antibiotic-resistant strains of bacteria threatening human health.WIKIMEDIA, CDCResearch teams will vie for the £10 million ($17 million) Longitude Prize, a new award funded by the United Kingdom government and innovation charity Nesta, by developing a “cost-effective, accurate, rapid and easy-to-use test for bacterial infections that will allow health professionals worldwide to administer the right antibiotics at the right time,” according to the prize’s website. BBC science presenter Alice Roberts announced the winning focus, which the British public voted for among five other categories, on the BBC’s “One Show” on Wednesday (June 25). “There were some amazing challenges,” she said of the other categories, which included flight, food, paralysis, water, and dementia. “But this is such an important one facing us at the moment.”

Antibiotic resistance has been building in the human population for years, and scientists have been racing to develop...

Astronomer Martin Rees, who is the chairman of the Longitude Committee, wrote in Nature last month (May 20) that he hoped the prize would encourage further investment after a winner was named in five years. “A well-designed prize should unleash investment from many quarters, amounting to much more than the prize itself, by enhancing the competitive focus on a challenge important for human welfare,” he wrote.

The prize is open to amateur and professional scientists as well as corporations, and research teams will be able to start submitting ideas this autumn. A winner will be chosen sometime before 2020.