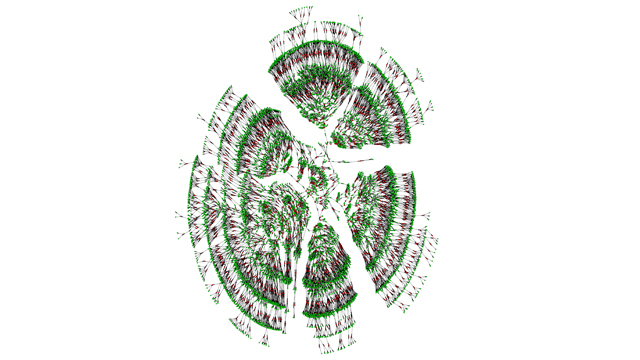 A family tree representing 6,000 people (green dots) and their marital links (red dots).COLUMBIA UNIVERSITYDownloading data from the genealogy site Geni.com, researchers have created a ginormous family tree that connects 13 million people by blood or marriage. The results reveal when, and possibly why, marrying a cousin became taboo as well as how genes influence length of life and how humans moved around the world for hundreds of years.

“You can harness the hard work of so many people around the globe just documenting their own family history, and learn something about humanity,” Yaniv Erlich, chief science officer of MyHeritage, the parent company of Geni.com, and coauthor of the paper, tells The New York Times.

Combining all of the data, the team was able to connect individuals, most of European descent, across 11 generations stretching back five centuries. The tree includes population geneticist Sewall Wright and actor...

“This study is an impressive and clever use of crowdsourcing data to address a number of interesting scientific questions,” geneticist Peter Visscher of the University of Queensland in Brisbane, Australia, who was not involved with the work, says in a Science news piece. He and others suggest the tree could serve a greater purpose: If linked with health data, it could reveal the role of genetics in diseases.

The results did hint at how it could answers such questions. The data suggest that genes only factor into how long we live by about 16 percent, down from an estimate of 25 percent from Scandinavian twin studies. Environment and behavior may play a larger role in longevity than previously thought, Erlich and his colleagues report.

As for marriage, people assumed that as Europeans and North Americans began to migrate more in the early 1800s, unions outside their own families increased. However, the recently published data point to a 50-year lag, with a reduction in consanguineous marriages only occurring after 1875. It could be the idea of marrying a cousin became taboo at the time, making social norms more important than geographic movement when it came to tying the knot.

“It’s very impressive as a data collection and harmonization effort, and of course they have only scratched the surface of what it might have to offer,” Philip Cohen, a sociology professor at the University of Maryland who was not involved in the research, tells The New York Times. However, he adds, “[i]t’s like reading a Jane Austen novel—it gives you lots of great insights, but you have to be careful about generalizing to society as a whole.”

Cohen and others are also concerned about privacy. In response, Erlich tells The Atlantic, “It’s part of the challenge of this new era.” He explains that at MyHeritage, the company allows people to delete profiles and to make their profile public or private. People can also request to have their DNA data, if they have submitted it, deleted. “We’ll go to the lab and we’ll even wash away the tube. So we take these things very seriously,” he says. “But if you ask me, do you want to share with me your genealogy or your cellphone records or search-engine records, I will share my genealogy.”