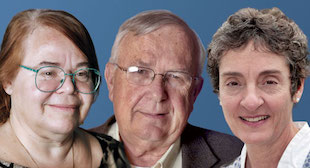 Left to right: Eve Marder, Michael Merzenich, Carla ShatzKAVLI FOUNDATIONEve Marder of Brandeis University in Waltham, Massachusetts; Michael Merzenich of the University of California, San Francisco; and Carla Shatz of Stanford University have won the 2016 Kavli Prize in neuroscience in recognition of their discoveries of mechanisms that enable experience and neural activity to remodel the brain.

“Our brains have a remarkable capacity to adapt to changes in the environment, [and yet] our personality and behaviors typically remain fixed as we pass through life,” Ole Petter Ottersen, chair of the Kavli neuroscience committee, said during today’s prizes announcement at the Norwegian Academy of Science and Letters in Oslo.

Marder studies simple brain circuits in crustaceans to discover how neurotransmitters work. Merzenich has shown how circuits in the sensory cortex (known as the homunculus) are remodeled by experience—in particular, how the auditory system adapts to hearing damage and cochlear... 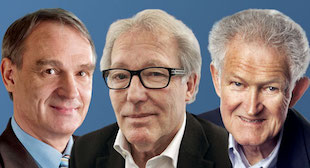 AFM is widely used in physics, chemistry, and biology. The technique, which Binning, Gerber, and Quate all helped develop, enables scientists to manipulate the arrangement of individual atoms and molecules.

“The sculpting of elements is a longstanding dream of nanoscience,” Arne Brataas, chair of the Kavli nanoscience committee, said during the prize announcements. “Atomic force microscopy has transformed this into reality.”