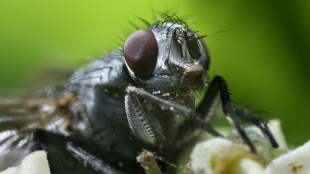 WIKIMEDIA, MAKRO FREAKScientists have developed a technique to see inside the muscles of a blowfly in flight. The flies were tethered, but moving their wings, as X-ray microtomatography captured the internal mechanics of how their steering muscles operate. “This by itself is a grand achievement at a wingbeat frequency of 145 Hz,” wrote Anders Hedenström of Lund University in Sweden, in a commentary in PLOS Biology.

Videos of the flies, published in PLOS Biology this week (March 25), offer an unprecedented look at the inner workings of the flight muscles as a tethered fly is spun in a circle. “This has been an awe-inspiring project on so many levels, not least the exquisite complexity of the insects themselves, but seeing the 3-D movies render for the first time was one of those breakthrough moments that as a scientist I’ll never forget,” Graham Taylor of Oxford University,...

Taylor said the results help explain how the steering muscles—which make up a small fraction of the fly’s flight-muscle mass—can deftly maneuver the animal and manage the direction of the much bigger power muscles. “The fly can divert power into a steering muscle specialized to absorb mechanical energy—rather like using the gears of a car for braking,” Taylor said in a press release. Another interesting finding was that the tendons of some steering muscles actually buckle with each wingbeat—there are 50 wingbeats in the time it takes for a human to blink—to accommodate the movements of the wing.

Hedenström pointed out that, while the study represents a “methodological breakthrough,” a tethered fly is not the same as a freely moving fly, which could roll, speed up, and stop. Also, the X-ray doses involved were lethal, limiting the time the researchers could record the insects. Still, “we can enjoy the stunning videos of the oscillating thorax and flight muscle system of the blowfly,” said Hedenström.