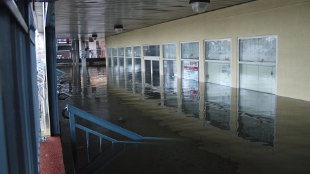 Flooding caused by Hurricane Sandy on Emmons Ave, Brooklyn, NYWikimedia, VicpetersIn 2009, the New York City Panel on Climate Change (NPCC) issued dire warnings to residents of the Big Apple that they'd be feeling the effects of global warming sooner rather than later. "In the coming decades, our coastal city will most likely face more rapidly rising sea levels and warmer temperatures, as well as potentially more droughts and floods, which will all have impacts on New York City’s critical infrastructure,” said NPCC co-chair William Solecki, a geographer at the CUNY Institute for Sustainable Cities at Hunter College, said in a February 2009 statement announcing the report. "Taking steps now to adapt to these impacts will reduce their potential consequences in the future."

The panel, which comprised top climate change scientists and academics and was funded by the Rockefeller Foundation, calculated that New York City would experience a...

"The climate change projections developed by our expert panel put numbers to what we already know—climate change is real and could have serious consequences for New York if we don’t take action," said NYC Mayor Michael Bloomberg in the statement announcing the report. "Planning for climate change today is less expensive than rebuilding an entire network after a catastrophe. We cannot wait until after our infrastructure has been compromised to begin to plan for the effects of climate change now."

A year before the NPCC report came out, Mayor Bloomberg launched the NYC Climate Change Adaptation Task Force, which was tasked with developing "adaptation strategies to secure the city's infrastructure from the effects of climate change."

Earlier this year, the NYC City Council passed a law that made the NPCC and the NYC Climate Change Adaptation Task Force a permanent fixture of the city's government. "We want to make sure that the work of climate change becomes as much a part of city government as repairing pot holes," City Council Speaker Christine Quinn told The New York Times.