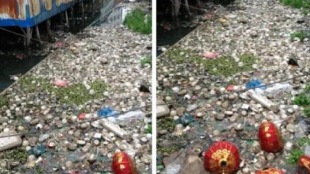 Photos Jin Zengmin posted on his Sina WeiboSCMP PICTURESIn a play to raise awareness of the pollution problems of China’s waterways, entrepreneur Jin Zengmin announced on Saturday (February 16) that he will pay a top government official to swim in an unnamed river that is filled with trash.

“If the environmental protection bureau chief dares to swim in [Ruian's] river for 20 minutes, I will pay [him] 200,000 yuan [US$32,090],” Jin, chief executive of a Hangzhou eyeglasses retailer, wrote on Sina Weibo, a Twitter-like social website.

Along with his challenge, Jin posted photos of the river in the Xianjiang neighborhood of Ruian. In the images, the surface of the water is not visible through the layer of litter and debris. Jin also accused a rubber overshoe factory of dumping industrial waste into the river, according to the South China Morning Post.