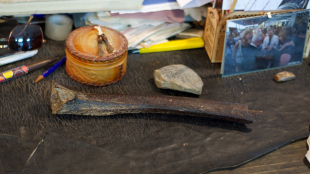 The Ust'-Ishim femur. BENCE VIOLA, MPI EVAAt the end of the Middle Paleolithic, a man died in Siberia. Now, his DNA has come back to life some 45,000 years later. Reporting in Nature this week (October 22), scientists have sequenced the oldest human genome, taken from a thigh bone found along the banks of the Irtysh river in Siberia.

“We were actually so amazed [by the age of the bone], we actually had it dated even twice, to make sure,” Svante Pääbo, the senior author of the study and the director of the Max Planck Institute for Evolutionary Anthropology in Leipzig, Germany, told NPR.

The bone helps to date early human migrations. “There is a dispute as to when that ‘Out of Africa’ event happened and this fossil helps to look at that. It is close to the time I think that modern humans exited from Africa and...

A few interesting finds came out of the researchers’ genomic analysis. For one, “we found that this Ust’-Ishim individual is equally closely related to present-day Asians and to early Europeans,” coauthor Janet Kelso told The Verge. The man also had Neanderthal DNA in his genome, including long stretches that indicate interbreeding close to the time he lived. “Everyone outside Africa has about same amount of Neanderthal DNA. It seems to be something early on where one really mixed with Neanderthals in a serious way,” Pääbo told The Guardian. “Since that happened I wouldn’t be surprised if, now and again, one did it here and there later on too.”