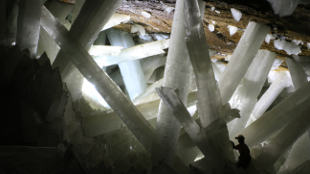 The giant gypsum crystals that made Naica mine in Mexico famousWIKIMEDIA, ALEXANDER VAN DRIESSCHEThe Naica mine in Chihuahua, Mexico, yields zinc, lead, and silver—not to mention the meters-long gypsum crystals that have made the site famous among rock hounds. But NASA researchers mined something else from the cave: microbes that have been surviving on sulfite, copper oxide, and manganese within those huge mineral accretions for millennia. “This has profound effects on how we try to understand the evolutionary history of microbial life on this planet,” said Penelope Boston, director of NASA's Astrobiology Institute, at the annual conference of the American Association for the Advancement of Science (AAAS) over the weekend.

The microbes, some of which were 60,000 years old, were in a state of suspended animation when Boston and her colleagues found them, but they succeeded in reanimating many of the organisms. “Much to my surprise we got...

The discovery is especially significant in the eyes of some astrobiologists, who search for signs of life beyond the confines of our planet. If organisms can survive for tens of thousands of years locked inside minerals, subsisting on compounds that aren’t typically used as sustenance by living things, microbes hitching rides on meteorites, for instance, may not be so farfetched. “If we bring samples back from either Europa or Mars, we will contain them until hazard testing demonstrates that there is no danger and no life, or continue the containment indefinitely while we study the material,” John Rummel, from the Seti Institute in Mountain View, California, told The Telegraph. “It is assumed that such life would be hardy—to survive the trip to Earth; not easy—and precautions taken would provide a very high degree of containment.”