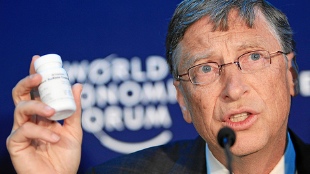 Some are calling it an unprecedented collaboration: 13 pharmaceutical companies, the Bill and Melinda Gates Foundation, the World Health Organization, The World Bank, and the US, UK, and UAE governments, and other groups have come together to fight neglected tropical diseases. Neglected tropical diseases tend to afflict the world’s poorest people, and thus companies have fewer incentives to invest in medicines and cures.

The partnership, announced yesterday (January 30) at the Royal College of Physicians in London, will focus on ten tropical diseases, including Chagas disease, guinea worm, and sleeping sickness. Drugmakers agreed to continue or expand drug donation programs through 2020 while sharing protocols and materials with one another to hasten new drug development. In total, the groups donated more than $785 million for research and to boost implementation and medicine distribution....

“It used to be that people would commit to a donation but nobody would order the drug because there wasn’t money to do the delivery,” computer mogul and philanthropist Bill Gates told Bloomberg News. “Here, because you’ve got delivery money being committed and manufacturing money being committed, every year the amount of people who get this mass drug administration is going to be 10 times what it’s been.”