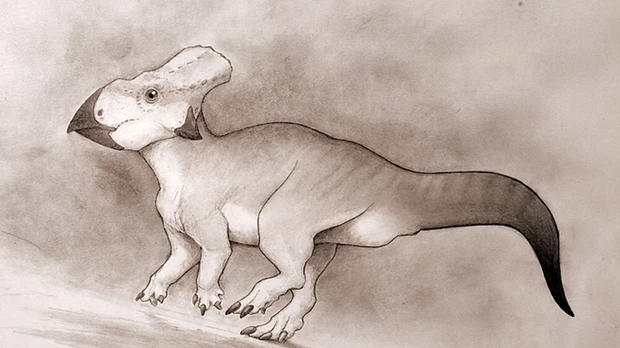 An artist's recreation of the newly described dinosaurPHOTO: NICK LONGRICH, UNIVERSITY OF BATHIn the late Cretaceous period, from about 100 million to 60 million years ago, North America was split down the middle by a shallow inland sea that stretched from the Gulf of Mexico to the Arctic. A newly described fossil specimen from the eastern half of the divided continent, called Appalachia, supports the idea that dinosaur evolution happened very differently there than among creatures that roamed the western half, called Laramidia.

The fossil dino, a Labrador-size member of the Leptoceratopsids, was a smaller cousin of Triceratops, and the shape of its jaw suggests a very specialized diet, distinct from that of its larger Laramidian relatives. The research will be published in the January 2016 issue of Cretaceous Research.

“Just as many animals and plants found in Australia today are quite different to those found in...

Longrich studied a piece of upper jaw bone from a Leptoceratopsid that roamed eastern North America about 100 million years ago. The fossilized maxilla contained several odd characteristics, including teeth that curved downward and outward to form a beak shape unique to the group. “Studying fossils from this period, when the sea levels were very high and the land masses across the Earth were very fragmented, is like looking at several independent experiments in dinosaur evolution,” Longrich said.