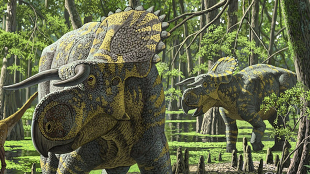 Nasutoceratops in the swamps of southern LaramidiaRAUL MARTINResearchers have described a new species of dinosaur with a big nose and unusually long horns that lived in western North America roughly 76 million years ago. The 5-meter-long creature, which is detailed in a paper out yesterday (July 18) in the Proceedings of the Royal Society B, has been named Nasutoceratops titusi, which means “big-nose horned-face.”

Paleontologists unearthed multiple specimens, including an almost complete skull, in Utah’s Grand-Escalade National Monument. In the Late Cretaceous period, this area was the southern part a swampy, subtropical island called Laramidia, cut off from the rest of North America by an inland sea.

Nasutoceratops’s distinct headgear distinguishes it from other centrosaurines, a group of horned dinosaurs that includes Centrosaurus and Styracosaurus. The discovery that a previously unknown centrosaurine roamed the southern part of Laramidia provides support for the idea that some...

The function of the big nose, and the large empty spaces it contained, is also mystery.