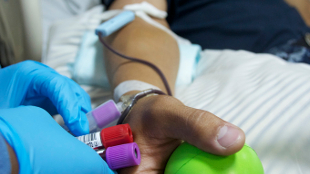 FLICKR, US NAVYA blood test that reveals epigenetic and gene-expression changes in one gene, SKA2, could help identify individuals at risk of suicide or suicidal behaviors, according to a study published yesterday (July 30) in The American Journal of Psychiatry.

Led by Zachary Kaminsky of the Johns Hopkins University School of Medicine in Baltimore, Maryland, the study began with a genome-wide scan for methylation changes in neurons and glial cells in post-mortem brains to identify genes associated with suicide. The search linked epigenetic and genetic changes in a single nucleotide polymorphism (SNP), rs7208505, within the SKA2 gene to a higher probability of suicidal ideation. SKA2 gene expression was significantly lower in suicide decedents, an effect linked to variations in this SNP.

Changes in SKA2 expression were also linked to suicidal behaviors in blood tests on three live cohorts. An assessment of stress—as measured by salivary cortisol levels—suggested...

“SKA2 has been implicated as important for the normal function of stress receptors,” Kaminsky told Popular Science. “It chaperones them, and it goes up when glucocorticoid binds to these receptors, which happens when you get stressed out.”