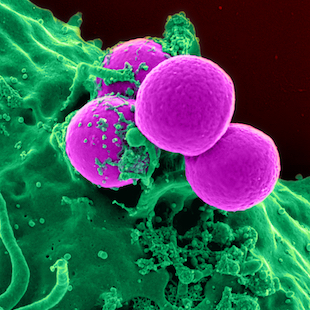 Methicillin-resistant Staphyloccus aureus being ingested by neutrophilNIHScientists can distinguish between a viral and a bacterial infection by assaying just seven human genes, according to a study published this week (July 6) in Science Translational Medicine. A clinical test based on these findings would enable doctors to more appropriately prescribe antibiotics, which are ineffective against viruses.

This May, US Centers for Disease Control and Prevention (CDC) reported that doctors prescribe antibiotics when they’re not needed in around 30 percent of cases examined. Overuse of these drugs may promote more widespread antibiotic resistance.

To address the problem, scientists at Stanford University looked at more than 1,000 patient blood samples to identify gene activation signatures associated with either bacterial or viral infections.

The researchers found they could distinguish these two classes of infections by analyzing the expression of seven genes alone. “The notion that there are just seven targets with...

“Our test can very reliably rule out bacterial infection,” study coauthor Purvesh Khatri wrote in an email to The Scientist.

For example, if the prevalence of bacterial infection is 15 percent in a community, and 100 patients are tested, if they all test negative, then the test is almost totally accurate: 98 patients truly won’t have a bacterial infection, according to the team’s analysis.

The researchers are working to improve the approach so that it can be applied in the clinic.

“A lot of people said we need a test like this, and we hope our test, or one like it, will help to reduce the crazy overuse of antibiotics that is threatening not just medicine but whole parts of our society based on our inability to treat certain infections,” Sweeney told Time.

Sweeney and Khatri told The Scientist that the test could be particularly useful during the early stages of an infection—prior to life-threatening sepsis—when antibiotics can be safely avoided.