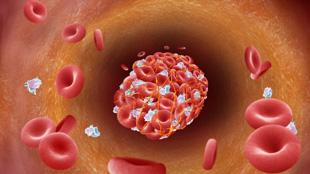 Carriers of BRCA1 and BRCA2 mutations may also be at an increased risk of developing heart failure, two new studies published in Nature Communications and The Journal of Biological Chemistry suggest. The researchers found that both mice and humans with oncogenic mutations in the genes suffered much more extensive damage in cardiac tissue after a heart attack—presumably due to increased apoptosis in cardiomyocytes and an inability to repair double-strand breaks in DNA. As a result, mice with BRCA1 and BRCA2 mutations were four to five times more likely to die following a heart attack.

In addition, BRCA1 and BRCA2-mutated mice that were treated with doxorubicin—a chemotherapeutic agent commonly used for the treatment of a variety of cancers including breast and ovarian—were also at a two-fold increased risk of succumbing to heart failure.  The results suggest that BRCA1 and BRCA2 proteins play a key role in...

"It's sort of a double-edged sword," Dr. Subodh Verma, a cardiac surgeon at St. Michael's Hospital in Toronto who led the study, told the Montreal paper The Gazette. "On one hand, [doxorubicin] is very effective at killing cancer cells. On the other hand, it unleashes cardiac toxicity."