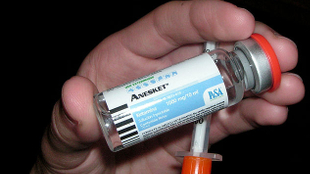 KetamineWIKIMEDIA, PSYCHONAUTDiverse anesthetic drugs, each with distinct molecular targets, disrupt communication between the front and rear of the brain, according to a new study published today (May 22) in Anesthesiology. The findings provide the strongest evidence yet that inhibition of frontal-parietal connectivity may be the common mechanism by which all anesthetics induce loss of consciousness.

“If the study’s findings are confirmed by subsequent work, the paper will achieve landmark status,” wrote Jamie Sleigh of the University of Auckland, who was not involved in the study, in an accompanying commentary. “[It] not only sheds light on the phenomenon of general anesthesia, but also how it is necessary for certain regions of the brain to communicate accurately with one another for consciousness to emerge.”

Researchers already knew that the commonly used anesthetics sevoflurane and propofol break down this particular route of brain communication. But it was not clear...

They found that although the raw EEGs looked very different, all three drugs caused a very similar inhibition of the passage of information between the front and rear of the brain. Analysis of frontal-parietal connectivity could therefore provide a universal metric of depth of anesthesia, which may lead to better anesthesia monitors that work reliably across all kinds of drugs. (For more on monitoring anesthesia, see our recent story “Measuring Consciousness.”)

The research also suggests that intact frontal-parietal communication is a prerequisite for consciousness, adding weight to the theory that consciousness relies on the integration of information between cortical regions of the brain.