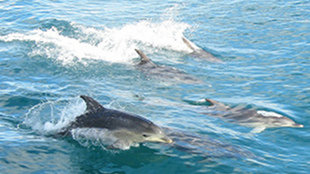 FLICKR, DOCKLANDS TONYLast month, a study suggested that dolphins use signature whistles developed during the early months of their lives to call each other by name. Now, a researcher from the University of Chicago has demonstrated that bottlenose dolphins can remember the distinctive whistles of members of their species for up to 20 years, according to a study published yesterday (August 7) in the Proceedings of the Royal Society B.

Biologist Jason Bruck collected data on relationships between dolphins that had been shuffled among six zoos and aquariums in the U.S. and Bermuda. Bruck then played the dolphins’ whistles to one another through underwater speakers.

Dolphins were more likely to respond to the whistles of those they had lived with in the past than to unfamiliar dolphins, approaching the speakers and whistling at them. The dolphins responded to the whistles of former tank mates even when they had...

“We can’t tell yet what the upper limit is time-wise, or even if there is one,” Bruck told Nature. “We just know it’s at least 20 years.”

Bruck wrote that the dolphins’ whistle memories could help them decide whether to approach a nearby dolphin to form an alliance, or avoid that dolphin because it posed a threat.

However, New College of Florida psychology professor Heidi Harley told The Washington Post that it was unclear whether the dolphins were conjuring pictures of their former tank mates or simply responding to familiarity. “Is this really about the dolphins that produce these whistles, or is it just about the sounds themselves? It’s a little hard to disentangle sometimes,” she said.