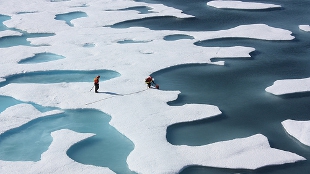 Phytoplankton blooms are expected in the summer after the ice melts in the Artic, in open waters that are free of ice. But in a paper published in Science last week (June 7), scientists observed that these blooms are occurring much earlier, in areas where the ice has thinned over the years, allowing light to penetrate.

The researchers noticed accumulated pools of water that had melted on the surface of the frozen Chukchi Sea, located between Alaska and Siberia. The researchers sampled the waters beneath the meter-thick ice and found a bloom that extended over 100 kilometers.

Because the blooms are occurring earlier in the season than expected, migratory birds and whales that come to the nutrient-rich waters to feed could be affected, though it's unclear yet whether that effect will be positive or negative. The finding also suggests that...

"The blooms are happening possibly weeks before the ice begins to retreat," first author Kevin Arrigo from Stanford University told ScienceNOW. "We have no idea how this might be changing those [migratory] patterns."