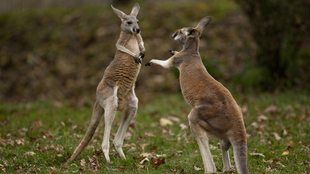 FLICKR, SCOTT CALLEJAThe foramen magnum (FM) is the hole in the base of the skull through which the spine passes to join the brain. By studying primate, rodent, and marsupial skeletons, University of Texas researchers have shown in a paper published online in Journal of Human Evolution this month (September 19) that a more anteriorly located FM correlates with moving upright on two feet.

Scientists have long embraced the theory that anterior FM placement and bipedalism are associated, based on the idea that the head balances better on the vertebral column of an upright organism if the FM is anteriorly positioned. But as authors Gabrielle Russo and Christopher Kirk pointed out in their paper, “researchers have faced difficulty in demonstrating an explicit functional link between foramen magnum position and locomotion.” Russo and Kirk attributed this difficulty in part to the dearth of living, habitually bipedal primates. The pair circumvented...

The researchers took cranial measurements of 71 living species. They showed that bipedal organisms generally had a more anteriorly located FM than their closest non-bipedal relatives, suggesting “that a more anteriorly positioned foramen magnum is a feature shared by mammalian bipeds,” they wrote. The authors also suggested that FM position could be used to determine whether human ancestors were bipedal.

But science writer Brian Switek urged caution in placing too much weight on FM position in fossils. “The way a kangaroo is bipedal is not the way a jerboa is bipedal is not the way we are bipedal,” Switek wrote at his blog. “We keep looking for a forward placed foramen magnum as a marker of humanity because of what our species is like today, but who knows what may yet be found among the little-known, early branches of the ape tree from which our ancestors split.”