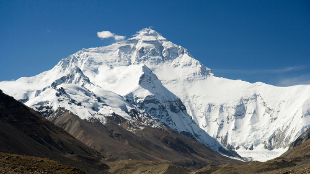 On Friday (April 20), a team of researchers from the Rochester, Minnesota-based Mayo Clinic arrived in the Mount Everest region of Nepal to begin setting up a high-altitude lab to study the effects of high altitude on human physiology. The study aims to inform the treatment of patients with heart conditions, who sometimes suffer symptoms similar to climbers enduring the low-oxygen environments of the mountaintops. "We are interested in some of the parallels between high altitude physiology and heart failure physiology," physiologist Bruce Johnson, who is heading the team, told The Associated Press. "What we are doing here will help us with our work that we have been doing in the [Mayo Clinic] laboratory."

Johnson and his team left Nepal's capital, Kathmandu, and are making the week-long trek to Everest base camp, where they'll set up their laboratory, in which researchers will measure lung congestion in 9 climbers as they attempt to scale the nearly 9,000-meter (29,000-foot) peak. Johnson said he expected to be working in the lab, which will be situated at about 5,300 meters (17,380 feet), until mid-May.

The work follows in the footsteps of similar high-altitude research on the effects of hypoxia in climbers, such as the studies performed by the University of Colorado's Robert Roach and University of Tübingen ophthalmologist Gabriel Willmann on Everest and other high peaks.