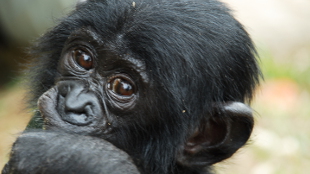 WIKIMEDIA, PIERRE FIDENCIAs Emory University primatologist Frans de Waal told The Verge, “‘animal emotion’ used to be a dirty word.” But in a study published today (October 15) in Proceedings of the National Academy of Sciences, de Waal and his Yerkes National Primate Research Center colleague Zanna Clay show that juvenile bonobos (Pan paniscus) can form friendships and express concern for one another, providing support for the idea that apes are capable of advanced social and emotional skills.

“The main conclusion of our study [is] that emotion regulation (self-control, managing extreme emotional states) is essential for a well-integrated social life,” de Waal told the Motherboard blog. “The individuals who are better at this are also the ones with most friends and with most empathy for their friends.”

De Waal and Clay studied the development of what they called “socio-emotional competence” among young bonobos at...

Speaking with Motherboard, de Waal noted how his team’s study differed from traditional investigations of primate behavior. Typically, he said, scientists viewed such behavior “through the lens of adaptation (evolutionary explanations), communication (meaning of signals), or social relationships (my own approach in terms of politics, social cognition, etc.).” But the present study “explicitly addresses emotions,” he told Motherboard. When it comes to bonobos consoling bonobos, he added, “it is almost as if one first needs to have one’s own emotional house in order before one is ready to visit the emotional house of another.”