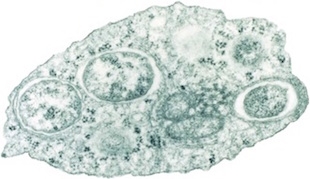 Wolbachia bacteriumWIKIMEDIA, SCOTT O'NEILLA growing body of research suggests infections with the Wolbachia bacterium can prevent mosquitoes from transmitting Zika and other viruses. Researchers from the University of Wisconsin-Madison and colleagues reported today (July 1) in Scientific Reports that Wolbachia can reduce the likelihood that Aedes aegypti mosquitoes will contract Zika from infected mice. And a team from QIMR Berghofer Medical Research Institute in Brisbane, Australia, and colleagues yesterday (June 30) reported a method for detecting the bacterium’s presence in mosquitoes using near-infrared spectroscopy, in PLOS Neglected Tropical Diseases.

“Our findings are complementary to results described earlier in the month in Cell Host & Microbe by our colleagues with [Brazil’s Oswaldo Cruz Foundation], which is really exciting and really promising,” Matthew Aliota of University of Wisconsin--Madison, coauthor of the Scientific Reports study, said in a statement, referring to a study published in May.

Meanwhile, Maggy Sikulu-Lord of QIMR Berghofer Medical Research Institute and colleagues used near-infrared spectroscopy (NIRS)—a non-destructive imaging method that involves shining a light of a specific wavelength on a sample and determining the spectrum of reflected light—to image male and female mosquitoes that were infected with either the benign wMel strain or aggressive, fitness-reducing wMelPop Wolbachia strain.

“NIRS may have real potential as an alternative method for monitoring Wolbachia incidence in mosquitoes,” the researchers wrote in their study, adding that the models still need to be validated in the field.