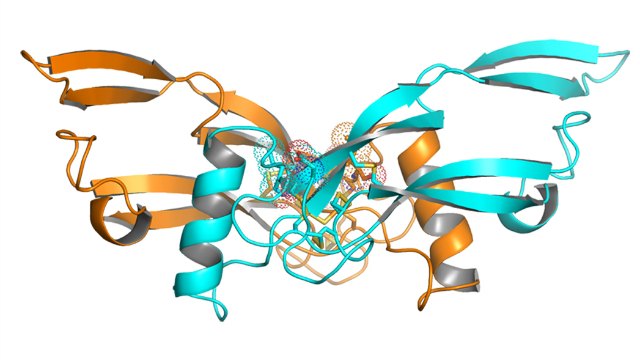 Crystal structure of a new engineered protein for treating obesity in laboratory animals. Y. XIONG ET AL., SCIENCE TRANSLATIONAL MEDICINE (2017)Researchers at the biopharmaceutical company Amgen have identified a protein that seems to help obese mice and primates to lose weight, as they report in a study published today (October 18) in Science Translational Medicine.

“This group really seemed to go a long way toward identifying what may be an interesting new approach to treatment, and that’s fantastic,” Paul Kenny, chair of the neuroscience department at Mount Sinai Health System in New York, tells Scientific American, adding that “key will be [determining] if it’s safe in humans.”

The researchers identified this protein, macrophage inhibitory cytokine 1/growth differentiation factor 15 (GDF15), through a microarray screen for secreted proteins that were differentially expressed between obese and lean mice. GDF15 is upregulated in the fat tissue and livers of obese...

After the researchers used a virus to administer the protein to obese mice, the animals’ weights dropped. Their levels of cholesterol, blood insulin, and food intake all decreased as well. Further, administering recombinant human GDF15 (produced in cultured cells) to obese mice and monkeys led the animals to lose weight and eat less.

Next, the team added an antibody fragment to the protein to make it last longer in the body, and its weight loss-inducing effects remained: monkeys injected with the protein lost 10 percent of their body weight over six weeks, New Scientist reports.

The researchers found that the protein delays the rate at which the stomach empties itself. They also found that it seems to change animals’ tastes so that they will choose normal chow over a high-fat alternative. (Animals not given GDF15 will take the high-fat option.) These changes in gastric emptying rates and food preferences also occur after bariatric surgery, the authors note.

A potential mechanism is that GDF15 binds to nerves in the gut, which in turn signal to the area postrema, a brain region that regulates appetite, New Scientist reports.

Amgen is not the only company trying to develop GDF15 drugs, New Scientist notes: Janssen, NGM Bio, Eli Lilly, and Novo Nordisk are also in the mix.