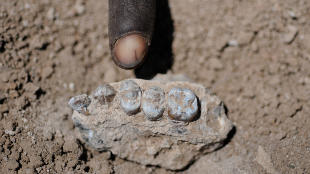 The holotype upper jaw of Australopithecus deyiremeda found in 2011YOHANNES HAILE-SELASSIEScientists have plucked a new hominin species from the same soils that yielded the famed Australopithecus afarensis skeleton named “Lucy.” The fossils, from a new species called Australopithecus deyiremeda, belonged to a hominin that lived in the present-day Afar region of Ethiopia between 3.3 million and 3.5 million years ago, and were unearthed just 35 kilometers (21.7 miles) away from the site where Lucy and other A. afarensis fossils were found. The find indicates that more than one hominin inhabited this part of Africa and complicates the picture of our own ancestry, according to Yohannes Haile-Selassie, a paleoanthropologist at the Cleveland Museum of Natural History in Ohio who led the study, which was published yesterday (May 27) in Nature.

“The question that is going to come up is which taxa gave rise to our genus, Homo...

Haile-Selassie and his colleagues found fossilized jaws and teeth from A. deyiremeda—whose name derives from the Afar words deyi (close) and remeda (relative)—in March 2011. Examining the fossils, the team realized that the lower jaw was more robust than that of A. afarensis, and the anterior teeth were smaller, though with thicker enamel, indicating a diet that was tougher and more abrasive than that of A. afarensis. “The presence of more than one hominin species in close chronological and spatial proximity would suggest differences in resource exploitation, including food preferences and the way in which food items were accessed,” Louise Humphrey of London’s Natural History Museum told New Scientist.

Although Haile-Selassie and his colleagues presented evidence that the newly found fossils belong to a different species, some researchers disagree. The University of California, Berkeley’s Tim White, for example, told New Scientist that the new fossils may just be examples of physiological diversity within A. afarensis. “Darwin recognized that anatomical variation within a biological species is normal,” said White.