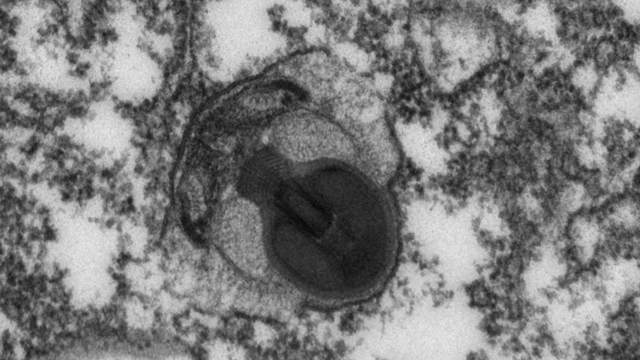 A cross-section through the specialized organelle of Ancoracysta called the “ancoracyst,” which is hypothesized to function as a gun used to immobilize prey cellsDENIS TIKHONENKOV / RUSSIAN ACADEMY OF SCIENCESFrom an aquarium at the Scripps Institution of Oceanography in San Diego, California, scientists have identified a unicellular species that could shed light on how eukaryotes evolved, they report in Current Biology this week (November 22). The tiny organism—named Ancoracysta twista—is not only its own species, says lead author of the study, Jan Janouškovec, but “it represents a whole new lineage in the eukaryotic tree of life.”

A. twista is about 10 micrometers long and moves by using its whip-like flagellum. It is named after its distinguishing feature—the “ancoracyst,” a gun-like organelle that it uses to “shoot” at and immobilize its prey, usually other flagellate species. Janouškovec, a molecular biologist at University College London, along with an international...

The researchers realized that Ancoracysta represents its own lineage when phylogenetic models could not reconcile its genetic material with that of any existing lineages. Ancoracysta is a protist, a group of unicellular, eukaryotic organisms that sit at the root of the eukaryotic tree of life. For researchers such as Janouškovec, they are an opportunity to study how ancestral eukaryotes first acquired their characterizing features including chloroplasts and mitochondria.

Biologists often look at the mitochondrial genomes of these primitive creatures and see how many genes they contain, to get an idea of how old they are in evolutionary terms. This stems from the endosymbiotic theory, in which an energy-generating cell was engulfed by an ancestral eukaryotic cell, and eventually assumed the role of producing energy for its host, becoming modern-day chloroplasts and mitochondria.

Throughout the course of evolution, the smaller cell lost much of its own genes to its host’s nucleus, retaining only those strictly necessary for energy production. In line with this theory is a long-standing assumption that some eukaryotes that have large mitochondrial genomes are probably closer to the eukaryotic root than others, explains Janouškovec.

This is why an obscure eukaryotic group known as the jakobids—which have particularly “gene-rich” mitochondria—represent one of the earliest branches in the eukaryotic tree, and reflect an ancestral state. Their mitochondria have about 60 protein-coding genes, while humans have 13.

But Janouškovec’s discovery has thrown a spanner into the works, because A. twista’s mitochondria also have a large number of protein-coding genes, 47, but they’re not closely related to the jakobids at all. This suggests that the origin of eukaryotes might be a bit more complicated than previously thought. A. twista is “helping us get a bit closer to answering some of those questions,” Janouškovec tells The Scientist.

Janouškovec’s study shows just how little we know about our own domain of life, in particular when it comes to protists. “When you think of microscopic algae, we understand them very well in general, but these [non-photosynthetic] flagellates we don’t understand at all, but they’re an important part of the whole ecosystem,” he says.

Clarification (November 20): The publication date of the paper is November 22, not November 20. We will add a link to the report once it’s online.