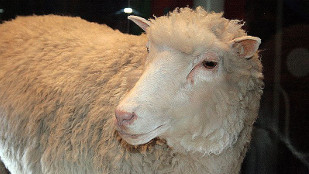 Wikimedia, Toni BarrosIn the 1996 experiment that created the famous sheep Dolly, researchers swapped the nucleus of an unfertilized egg with that of a differentiated adult cell, which rebooted the adult nucleus to create the first cloned mammal. Now, John B. Gurdon of the Gurdon Institute in Cambridge and colleagues—who developed the technique and shared the Nobel Prize in Physiology or Medicine this year—have found that a histone variant, H3.3, plays a central role in transitioning an adult cell’s nucleus to a blank-slate capable of developing into any of the body’s cells.

"Manipulating the H3.3 pathway may provide a way to completely wipe a cell's ‘memory’ and produce a truly pluripotent cell,” geneticist Steven Henikoff, from the Fred Hutchinson Cancer Research Center, said in a press release. The results, published today (October 29) in Epigenetics & Chromatin, could have implications for regenerative medicine and other therapies, he added,...

For the experiment, Gurdon and colleagues implanted a nucleus from an adult mouse cell into an enucleated frog egg—similar to his first groundbreaking nuclear transfer experiment in 1962—and added fluorescently labeled histones, around which strands of DNA wrap, making certain genes available or unavailable for transcription.

"Using real-time microscopy it became apparent that from 10 hours onwards, H3.3 . . . became incorporated into the transplanted nucleus,” explained Gurdon in the press release. The team noted that H3.3’s placement in the DNA coincided with regions important for the regulation of key pluripotency genes, such as Oct4. The researchers also found that the nucleus wouldn’t reprogram without H3.3 present.

The finding suggests that this histone variant is necessary for global genome changes that control the cell fate, the authors wrote in the study.