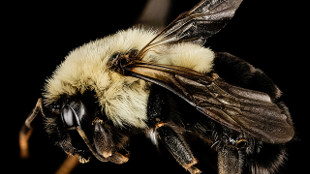 Increased temperatures in North America and Europe appear to be taking their toll on bumblebee populations there. According to a study published last week (July 10) in Science, the geographical range of bumblebees in Europe and North America has shrunk by as much as 300 kilometers (186.4 miles) in the past four decades.

“These species are at serious and immediate risk, for rapid human induced climate change,” study coauthor Jeremy Kerr, a biologist at the University of Ottawa, told BBC News.

Kerr and his colleagues analyzed more than 420,000 reports of bumblebee sightings, covering 67 species, recorded between 1901 and 2010 to chart the insects’ movements and determine how they responded to changing climates. Using statistical modeling, the group found that thermal shifts could account for the bumblebee’s northern creep, independent of pesticides or land cover.

Although they have been retreating from the southernmost edges...

Lawrence Harder, an ecologist at the University of Calgary told NPR’s The Salt that it is possible the bumblebees are restricted from expanding their northern boundary because of the types of vegetation available.

“What we need now are vigorous experiments to see what it is about changing climate that is really affecting the bees,” said Richardson.