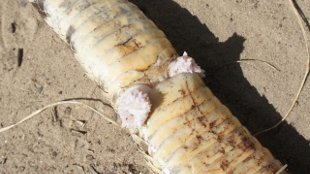 A Western Diamondback Rattlesnake's paired penises, or hemipenes, which emerge from where the legs used to be on snakes' evolutionary ancestors WIKIMEDIA, TESS THORNTONEven though male lizards and snakes have two penises while male mammals, birds, and crocodiles only have one, the two groups have a lot more in common than meets the eye, researchers have found. A team led by scientists at Harvard determined that, in snakes and lizards, external genitalia develop from the same cells that give rise to hind legs, while in mammals, birds, and crocodilians, they derive from the tail bud, which forms the posterior parts of their bodies. Despite these differences, developing genitalia of both types involves the same basic genetic programs and signaling cascades. The group reported its results in Nature this week (November 5).

“While mammal and reptile genitalia are not homologous in that they are derived from different tissue, they do...

The research also may find clinical relevance. “It’s clearly really basic research, mostly about evolution and development. But what is interesting is it has been known in the medical field that babies that are born with malformations in their limbs often also have malformations in their genitalia,” study coauthor Patrick Tschopp told the Boston Globe. “We knew there was some sort of genetic link between the two, and this could provide some information about where these genetic links are.”