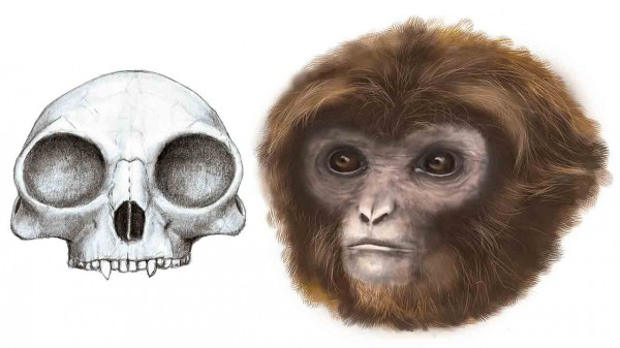 Is Pliobates cataloniae the ancestor of all apes?IMAGE: MARTA PALMERO / INSTITUT CATALÀ DE PALEONTOLOGIA MIQUEL CRUSAFONT (ICP)Researchers working in Spain have unearthed a fossil that may rewrite the evolutionary history of all apes, including great apes and humans. The fossil ape—dubbed Pliobates cataloniae after the Spanish province of Catalonia, where it was found in 2011—is much smaller-bodied than the fossil ape previously suspected to be the last common ancestor of apes. But the 11.6 million-year-old partial skeleton has both great-ape traits—such as a large braincase and wrists and forearms that were capable of rotating in order to facilitate climbing and clambering—and traits shared with lesser apes like gibbons and siamangs, suggesting that it may deserve a spot at the very base of the ape evolutionary tree.

The placement of P. cataloniae at the root of the ape family tree means that great-ape body plan may have changed more through evolutionary time than scientists had realized. “We should be careful about discounting small-bodied taxa as the last common ancestor,” Alba told Science. “For decades, the small stuff was thought to be related to gibbons and the big stuff was thought to be related to great apes,” John Fleagle, a paleoanthropologist at the Stony Brook University in New York, told Science. “You can’t ignore all the little guys.”

Understanding the mosaic nature of P. cataloniae’s features and resolving its place in ape evolutionary history may help researchers understand how great apes and humans took shape. “Pliobates suggests to us that some key features that characterize all the extant hominoids [living great apes] were already present in the last common ancestor,” Alba told The Christian Science Monitor. “This is important for understanding the later evolutionary history of the group.”