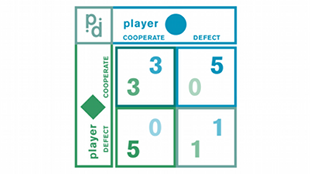 WIKIMEDIA, CHRISTOPHER X JON JENSEN AND GREG RIESTENBERGMathematicians and biologists have long used the prisoner’s dilemma as a model system for understanding cooperation and its evolution in animal groups. But while a recent study identified a selfish strategy that would reap rewards for its practitioners, a paper published last week (August 1) in Nature Communications reveals the downfall of a selfish strategy over time within an evolving population.

Mathematicians had determined that, when the game was played over many rounds, the best...

But last year (June 2012), mathematicians Freeman Dyson and William Press published a paper in the Proceedings of the National Academy of Sciences claiming that they had come up with a more selfish strategy for calculating what to do based on the other player’s previous move. Called the zero-determinant strategy, the method would give a player a consistent advantage in the game.

The new Nature Communications paper explores the implications of the “selfish” zero-determinant strategy at the population level by running computer simulations in which the losing strategies become less frequent over time. They argue that as members of a population using the strategy gain an advantage, natural selection will cause the number of selfish members to become an increasingly large proportion of the population, such that they start playing against each other, at which point the strategy is would no longer be advantageous.

“For a short time and against a specific set of opponents, some selfish organisms may come out ahead,” Christoph Adami, a professor of microbiology and molecular genetics at Michigan State University and an author of the paper, said in a press release. “But selfishness isn’t evolutionarily sustainable.”