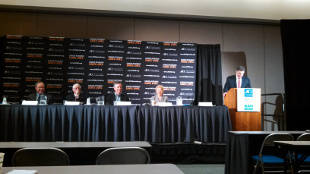 Panelists at AACR session: “Honoring the 50th Anniversary Surgeon General’s Report: The Health Consequences of Smoking—50 Years of Progress”In 1964, the U.S. Surgeon General released the first report on the effect that cigarettes and other forms of tobacco have on human health, presenting strong evidence of the link between smoking and lung cancer, among other adverse consequences. During the last 50 years, significant progress has been made in terms of understanding how smoking causes various diseases and how to treat them, and educational campaigns have contributed to a drop in smoking rates from 42 percent to 18 percent of US adults. Nevertheless, more than 480,000 Americans still die from tobacco-related diseases each year, and additional health consequences continue to be linked to smoking.

“Between now and mid-century, nearly 18 million Americans will die preventable avoidable deaths if we don’t do something to alter that trajectory,” Mitchell Zeller, the director...

To this end, the AACR released a compilation of peer-reviewed research and review articles, published across seven of its journals, covering basic scientific research on the molecular mechanisms of tobacco carcinogenesis, tools for the diagnosis of lung cancer and other tobacco-related diseases, and the impact of the original Surgeon General’s report on tobacco control. Ellen Gritz from the University of Texas MD Anderson Cancer Center helped put the new report together. “Together, these reports add to the broad reach of important tobacco-related research at the forefront of cancer research and policy, and shine a light on both the challenges and opportunities ahead,” Gritz said.

“[The report] drives home the need for action, citing this large burden of smoking-attributed premature death and morbidity, . . . [and] ends with a call for more action,” added Jonathan Samet, a pulmonary physician and epidemiologist at the University of Southern California.

In addition to the special report, AACR today hosted speakers from the FDA, the National Cancer Institute (NCI), and other groups to discuss the way forward for tobacco-related research, education, and regulation. “Clearly, if you think about other domains of health and risk, if a consumer product were to be introduced onto the market which caused a few dozen deaths it would easily make national news, and produce a public outrage, 60 Minutes reports, headlines,” said Robert Croyle, who directs the Division of Cancer Control and Population Sciences at NCI. “But we’re in a bizarre situation where we have a legal product on the market that’s responsible for about half a million deaths [each year].”

Zeller pointed to several recent FDA initiatives aimed at reducing tobacco-related deaths, including education campaigns targeting young people. Like the other panelists, Zeller praised the progress that has been made, noting the “remarkable denormalization of tobacco use” since a time when his parents would put out bowls of loose cigarettes at parties, and when he and his classmates would make ashtrays in arts and crafts class. But he emphasized that the fight is far from over. “As we pause to acknowledge all of that progress, we also have to take stock of the work that lies ahead of us,” Zeller said.