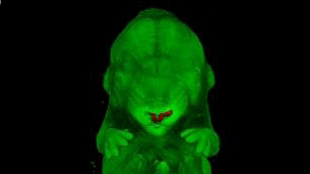 EUREKALERT, BERKELEY LABNo one person—or animal—has the exact same face shape as another. Now scientists have a better idea of how these differences, even small ones, might arise. Researchers led by Axel Visel of the Lawrence Berkeley National Laboratory in California have shown that mouse genetic enhancer sequences—DNA that does not code for proteins, but can instead modify the expression of other genes—can affect face shape. The work was published today (October 25) in Science.

“Enhancers are part of the 98 percent of the human genome that is non-coding DNA—long thought of as ‘junk DNA,’” Visel told New Scientist. “It’s increasingly clear that important functions are embedded in this ‘junk.’”

The researchers began by collecting cranio-facial tissue from embryonic mice for chromatin immunoprecipitation using p300, a protein associated with genetic enhancers, followed by sequencing. They identified 4,399 enhancer candidates throughout the genome, many of which were...

Lavinia Paternoster of the University of Bristol in the U.K. told New Scientist that the study is an important one. But in her research on face shape, Paternoster has not found that non-coding regions of the genome have much influence. “I am in no doubt that some enhancers do harbor some genetic variants that will influence face shape,” she told New Scientist, “but they are not the Holy Grail of missing heritability.”