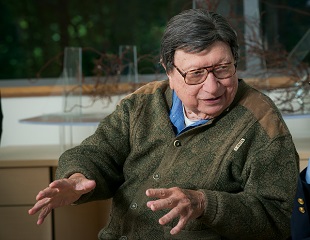 EVAN CANTWELL/GEORGE MASON UNIVERSITYBiophysicist Harold Morowitz, best known for his work on thermodynamics in biology and the origins of life, died in Falls Church, Virginia, last month (March 22). He was 88.

The Clarence Robinson professor of biology and natural philosophy at George Mason University since 1988, Morowitz engaged in a range of research topics, from the chemistry of brine shrimp eggs to a cycling theory of flow that has been nominated as a candidate for the fourth law of thermodynamics. He authored more than 15 books aimed at students and a general audience. (Read an excerpt of Cosmic Joy, Local Pain in The Scientist).

Born in 1927 in Poughkeepsie, New York, Morowitz studied physics and philosophy as an undergraduate student at Yale. Staying on at the university, he completed a master’s in physics and a doctorate in biophysics—all by the age of 23—and just four years later...

A longtime consultant to NASA and a member of the scientific advisory committee for Biosphere 2 (the largest-ever enclosed ecosystem), Morowitz was a strong advocate for a theory of emergence of life from chemical and physical principles. In the 1983 McLean v. Arkansas case over teaching creationism in schools, he provided an expert opinion, testifying in front of the court that the creationist view of life’s origins has no basis in science.

“Harold Morowitz is one of the world’s seminal thinkers about the origin of life within the context of the physics of our universe,” James Olds of the National Science Foundation told The New York Times. “Insomuch as we have stars with elements that go through life and death cycles of their own, Harold would say those physics and chemistry inevitably produce life.”

Morowitz is survived by his wife, four sons, two sisters, and nine grandchildren.