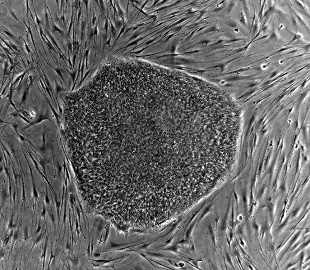 WIKIMEDIA, ID711Researchers have grown human embryonic stem cells (hESCs) from an adult’s skin cells, according to a paper published last week (April 17) in Cell Stem Cell. The team, led by Dong Ryul Lee of the CHA Stem Cell Institute in Korea and Robert Lanza of the biotech firm Advanced Cell Technologies (ACT), used somatic cell nuclear transfer (SCNT), a technique in which the nucleus of an female egg cell is removed and replaced with the nucleus of a donor’s cell—the same technique used to clone Dolly the sheep in 1996.

Although the technique was first used last year to create hESCs from a donor nucleus taken from an infant, the current study used skin cells from a two men—one 35 years old and the other 75 years old. “There are many diseases, whether it’s diabetes, Alzheimer’s or Parkinson’s disease, that usually increase with age,” Lanza told NPR’s...

“Overall, I think this paper is an exciting, important, and technically convincing,” Paul Knoepfler of the University of California at Davis who studies stem cells and was not involved in this study wrote on his blog. “SCNT ES cells may give us another potential tool to help patients via stem cells.”

The finding, however, also brings old bioethics concerns to the fore. “This and every technical advance in cloning human tissue raises the possibility that somebody will use it to clone a human being, and that is a prospect everyone is against,” Marcy  Darnovsky, executive director of the Berkeley, California-based Center for Genetics and Society told The Washington Post.