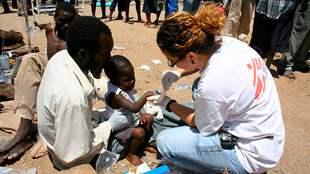 Although oral cholera vaccines have been available since the 1980s, it wasn’t until very recently that the World Health Organization (WHO) considered using them as a means to control large, active cholera outbreaks. Following a much-debated and delayed vaccination trial in Haiti—which began last April , some 6 months after the cholera outbreak started—the government of Guinea has partnered with the global charity Médecins Sans Frontières (MSF), also known as Doctors Without Borders, to vaccinate more than 100,000 people—making it the first time an oral cholera vaccine is used in Africa to control an active epidemic.

“Until very recently, no one was using this as an extra tool to control cholera,” Iza Ciglenecki, the project manager for diarrheal diseases at MSF who led the effort in Guinea, told Nature. “We hope to add to...

WHO first recommended the use of the vaccine during active epidemics in March 2010—months before the cholera epidemic took hold in Haiti. However, the organization initially opposed implementing the control measure in Haiti, for several logistical reasons, including the very limited availability of vaccines, the difficulty of reaching affected and vulnerable people in time, and the worry that resources would be better spent on cleaning up contaminated water supplies and improving sanitation.

Over the next 6 months, officials at WHO will be monitoring the efficacy of the vaccination campaign in Guinea and will be collecting data that will inform how best to deliver the oral medicine during the chaos of an ongoing cholera epidemic.