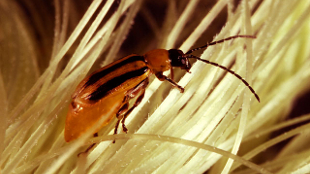 The adult stage of the western corn rootworm searches for pollen on corn silk.WIKIMEDIA, USDA - TOM HLAVATYScientists had been warning agrichemical companies and US corn farmers for years that the western corn rootworm (Diabrotica virgifera virgifera) would evolve resistance to insecticide-producing genetically modified (GM) maize varieties if the modified trait wasn’t deployed more thoughtfully. Now, a PNAS paper published this week (March 17) details just how problematic that rising resistance has become in corn fields across the nation. “Unless management practices change, it’s only going to get worse,” Iowa State University entomologist Aaron Gassmann, who led the study, told Wired. “There needs to be a fundamental change in how the technology is used.”

First grown on a wide scale in 1996, the GM maize—called Bt corn for the bacterial toxin gene it incorporated from Bacillus thuringiensis—raised yields and drove down populations of corn...

The problem was that farmers were growing too much Bt corn without planting sufficiently large refuges of non-Bt corn so that the insects there would remain susceptible to the toxin and that susceptibility could be kept alive through the pests’ mating with rootworms from populations feeding on Bt corn. Even though independent researchers warned that resistance would evolve, farmers and the companies that created and sold the GM maize failed to heed their advice, often ignoring even the US government’s guidelines regarding refugia. “Resistance was caused because the farmers did not plant the required refuges and the companies did not enforce the planting of refuges,” Cornell University entomologist Elson Shields told Wired.

Another problem that led to the rise of resistance in corn rootworms was that farmers grew Bt corn year after year instead of rotating other crops, a decision mainly driven by high corn prices. Not growing corn continuously naturally decreases populations of rootworms and other corn pests. Nicholas Storer, a global science-policy leader for biotechnology at Dow AgroSciences, told Nature that modern technologies must be paired with traditional agricultural practices, such as crop rotation, to maximize the benefits of GM organisms. “Crop rotation was the primary tool to combat rootworm before Bt came along,” he said. “We need to keep it up.”

The corn rootworm scenario should serve as a cautionary tale for the rise of resistance in other insect species if GM traits, such as Bt toxin production in corn, are not cultured more wisely on the landscape. Other such traits “will fall under the same pressure,” Shields told Wired. “And the insect will win. Always bet on the insect if there is not a smart deployment of the trait.”

And when insects like the rootworm win, farmers will resort to using pesticides, thus negating one of the key benefits of GM crops designed to combat pests using toxin-producing genes.