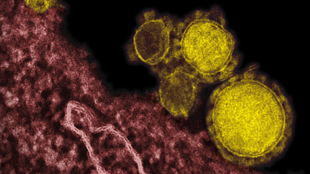 Micrograph of MERS-CoV particles (yellow)FLICKR, NIAIDAntibodies for the Middle East respiratory syndrome coronavirus (MERS-CoV) are known to be widespread in Saudi Arabian camels. It’s long been thought that contact with MERS-infected camels—through consumption of the animals’ milk or meat, for example—was sickening humans, but a study published in mBio today (July 22) suggests that the virus might also be airborne. Medical virologist Esam Azhar from the King Fahd Medical Research Center’s Special Infectious Agents Unit and his colleagues have detected genetic fragments of MERS-CoV in a sample of air from a barn that housed an infected camel.

Using reverse transcription PCR (RT-PCR), the researchers detected the virus in the air sample, which was collected the same day the sick camel tested positive for MERS-CoV. Other air samples from the same barn did not test positive for the virus, suggesting that proximity to the infected animal matters....

“Detection of airborne MERS-CoV molecules, which were 100% identical with the viral genomic sequence detected from a camel actively shedding the virus in the same barn on the same day, warrants further investigations . . .” Azhar said in a press release. He added that, while far from conclusive, the results suggest that people working with camels ought to take precautions—such as wearing face masks—to stop the spread of MERS.

Mark Denison from the Vanderbilt University School of Medicine in Nashville, Tennessee, urged caution when interpreting the study’s results. “What they say is that virus particles can be airborne, but it’s premature to conclude that MERS is transmitted through aerosols,” Denison, who was not involved in the work, told CNN. “I could take billions of particles of dead viruses and could still find the RNA. That doesn’t mean that there are infectious aerosols.”