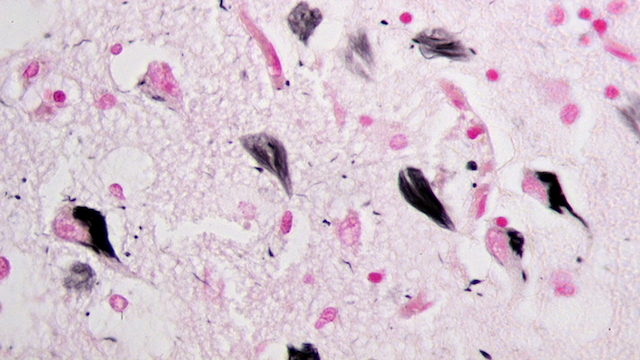 Neurofibrillary tangles in the hippocampus of a patient with Alzheimer-related pathology.WIKIMEDIA, PATHO

Alzheimer’s disease should be defined by changes in the brain rather than cognitive symptoms such as memory decline, according to a report published today (April 10) in Alzheimer’s & Dementia.

This proposal, which was put forth by the Alzheimer’s Association and the National Institute on Aging, suggests that Alzheimer’s patients should be defined by in vivo biomarkers, such as brain scans to identify neurodegeneration or spinal fluid tests to detect β-amyloid and tau, two proteins involved in the pathology of the disease.

“What we’re seeing now is that Alzheimer’s disease is defined by the presence of plaques and tangles in your brain,” Clifford Jack, a Mayo Clinic brain imaging specialist and coauthor of the report, tells NPR. Within this framework, he adds, “symptoms become the result of the disease, not the definition of the disease.”...

Through this new definition, the number of people considered to have Alzheimer’s “will increase dramatically,” Jack tells the Associated Press. “There are a lot more cognitively normal people who have the pathology in the brain who will now be counted as having Alzheimer’s disease.”

The authors of the report note that this definition is meant to be used in observational and interventional research, not the clinic. “It’s a research framework meant to be tested, a tool for researchers, not for the doctor’s office,” coauthor Maria Carrillo, chief scientific officer of the Alzheimer's Association, tells NPR. She adds that biomarker-based tests could one day help prevent the disease, once effective drugs are available.