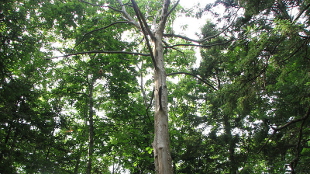 Wikimedia, ChoessThe American chestnut (Castanea dentate) was once the cornerstone tree species of eastern North America, showering forest floors with nuts upon which several animal species relied for food. But in the early 1900s it began to fall victim to chestnut blight, a fungus that had arrived from Asia. Where it had dominated a vast range from Maine to Mississippi, by the 1950s the chestnut was almost gone. Now, efforts to tame the blight are finally beginning to pay off, raising the possibility that the iconic tree could flourish again.

A number of approaches are bearing fruit. The American Chestnut Foundation (ACF), an alliance of amateur enthusiasts and plant pathologists, has created blight-resistant hybrid trees by crossing descendants of original chestnuts with the smaller Chinese variety (Castanea mollissima), which has some natural immunity. After decades of work, they now have the most promising hybrid...

Other plant scientists are trying to create a genetically modified (GM) version with resistance conferred by genes inserted into the American chestnut genome from Asian chestnuts. They are currently testing their GM trees, and plan to seek federal approval for larger planting projects. “Chestnut may be the first case of a genetically engineered tree that's planted out,” Douglass Jacobs, a forest ecologist at Purdue University who was not involved in the work, told Nature. “If that happens it can probably pave the way for other trees.”

Others hoping to restore the American chestnut to prominence are tackling the blight with viruses that spread easily among closely related fungi—a tactic that has worked in Europe. But American fungal strains are more diverse, which slows things down, so researchers have developed a transgenic virus designed to spread more easily. If it can compete with and replace wild-type fungal strains, it could be a weapon used in the protection of American chestnuts.

Correction (November 5, 2012): This story has been updated to reflect that the "restoration chestnut" is 94 percent American and 6 percent Chinese. The Scientist regrets the error.