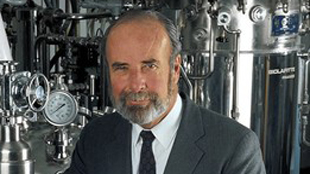 In the late 1970s, George B. Rathmann left his job as head of research and development for diagnostics at Abbott Laboratories to take the helm of a tiny start-up experimenting with a new technology—the ability to splice genes from one organism into another. The company’s name was Amgen, and it went on to become the world’s largest biotechnology company, making $15.6 billion in revenue last year alone, according to The New York Times. Because of his work at Amgen and subsequent biotech companies, Rathmann is considered one of the fathers of the biotechnology industry.

Rathmann died on Sunday (April 22) at his Palo Alto, California, home at the age of 84, from complications from pneumonia, the Los Angeles Times reported. Rathmann suffered from kidney failure for several years prior to his death, and while on dialysis during that time, he was treated with Epogen, an anemia...

A chemist by training, Rathmann helped raise $19 million to fund Amgen and staffed the company with young, eager scientists. “He just had the respect of so many other CEOs,” Daniel Vapnek, the first director of research at Amgen, told The New York Times. “I think he gave it a real level of credibility.” At Amgen, Rathmann led the development of two of the most successful drugs in history: Epogen and Neupogen, a treatment that helps prevent infections in cancer patients receiving chemotherapy.

Rathmann retired as Amgen chairman in 1990 and co-founded Icos, a company that developed the erectile dysfunction drug Cialis and was acquired by Eli Lilly & Company for $2.3 billion in 2007. He also served on the board of several other biotech companies and started the Rathmann Family Foundation, which donates to education, health, the arts, and the environment.

Rathmann is survived by his wife of 62 years, three daughters and two sons, and 13 grandchildren.